Not The Music is a duo of bassist Eric Norman and bass clarinettist Philippe Lauzier, both Montréal-based musicians. English saxophonist John Butcher joined them for concerts in Ottawa and Montréal. First five improvisations — En conséquence — were recorded live on April 27th 2018 in Ottawa. The second set of five improvisations — par interruption — were recorded live on April 26th in Montréal. Lauzier is a composer, improviser, instrumentalist (clarinet & saxophone) and sound artist. Normand is likewise working on many fronts as a composer, improviser, bassist, instrument designer, composer, songwriter, singer and record and concert producer. Earlier the duo released an album for Tour de Bras. Here in the company of John Butcher, they give way to very concentrated set with a lot happening. All three of them are experienced improvisers, each one with its distinctive style and technique. They interact and communicate with full force and concentration, although sounding sometimes a bit hesitant and modest. Strongly focused they demonstrate a concentrated interaction with sometimes diverging sometimes-converging manœuvres of emotional impact. Often repetition of motives and gestures is an important strategy of building up tension and drama. Excellent work. 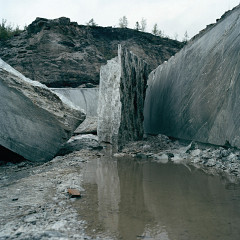 How Does This Happen?
Excellent work.