Jean Derome, composer and improviser from Montréal is one of the most active forces in the Ambiances Magnétiques-scene, that was co-founded by him in the early 80s scene. Sudoku pour Pygmées is his most recent release in a series of uncountable releases over the decades. This one has Derome as a composer. The CD counts three compositions for a large ensemble. Composed for different occasions over a period of 20 years. The title piece was composed in 2010, 7 danses (pour «15») in 1989 and 5 pensées (pour le caoutchouc dur) in 2001. They have been re-orchestrated by Derome for an extended line up of Dangerous Zhoms: Jean Derome (flute, baritone saxophone, composer), Guillaume Dostaler (piano), Pierre Cartier (double bass), Pierre Tanguay (drum set), Jean Rene (conductor), Guido Del Fabbro (violin), Lori Freedman (bass clarinet, clarinet), Andre Leroux (tenor saxophone, clarinet), Craig Pedersen (trumpet), Julie Houle (tuba), Bernard Falaise (electric guitar) and Olivier Maranda (percussion). For the title piece, Derome took inspiration from the Sudoku puzzle, a square of 45 units that Derome divided into 5 groups of 9. He composed nine canons and created a polyphonic whole, which is a very musically complex and enjoyable work that started with playing with a non-musical game. 7 Danses (1989) is a work that plays with contrast in styles and genres. Seven short miniatures, moving between one and four minutes, are dressed in different musical styles: rock, jazz, shuffle, waltz, etc. Concluding composition 5 pensées (pour le caoutchouc dur), was originally composed for Vancouver’s Hard Rubber Orchestra in 2001, is likewise a journey through different moods en thoughts. The second part refers to Monk, the third one to Ellington. Derome is well known as an improviser and jazz musician. But it is really a joy to have him here as a composer of very well constructed, though not renewing chamber music. 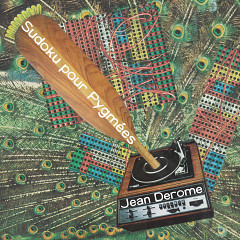 Sudoku pour Pygmées
Derome is well known as an improviser and jazz musician. But it is really a joy to have him here as a composer…