French improviser and composer eRikm is one of the few artists whose work has been a consistent element in my journey into experimental music. His collaborative CD with Jérôme Noetinger, What a Wonderful World, was one of the first Erstwhile releases I heard and introduced me to the field of electroacoustic improvisation, and Zygosis made me realize the power of the turntable as an instrument in an avant-garde context. Mistpouffers, consistent with Empreintes Digitales’ focus on acousmatic music, collects three pieces that were composed and arranged from 2013 to 2016. Draugalimur, commissioned by the French music office, incorporates several spoken word segments within its immersive ambient soundscapes, including excerpts from traditional Icelandic folk writings. Poudre and L’aire de la Moure 2 are both explorations into a very physical stereo space; the former’s treated recordings of firework explosions and the latter’s electric whirring and airplane engines are equally breathtaking. 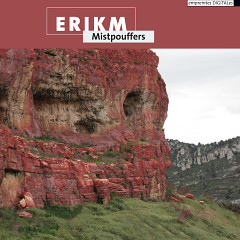 Mistpouffers
… the former’s treated recordings of firework explosions and the latter’s electric whirring and airplane engines are equally breathtaking.