This was one heck of an album to track down the details for, which could have been solved simply by the inclusion of a one-sheet. If there was one it must have gotten lost en-route to me from Chain D.L.K. central, and just about everything about this album and its producers had to be sourced off the Internet. Have you ever tried Googling “Political Ritual”? Just use your imagination as the results you’ll get in this day and age. Fortunately, the artists, Félix-Antoine Morin & Maxime Corbeil-Perron, put their names on the album, but both being French-Canadian, much of the info about them and Political Ritual (the name of the project is also the album title) is in French. According to Morin and Corbeil-Perron, Political Ritual build their music in architectural and woven layers of harmony and polarity, arranging ethereal drone next to hard edged buzz or cinematic movements alongside pummeling beats. With live performance as their backdrop, Félix-Antoine Morin and Maxime Corbeil-Perron took to the studio in 2014 for their first album. Corbeil-Perron is a multidisciplinary artist who has created film and video work and interactive installations shown at international events and festivals, as well as making electro-acoustic and mixed-media music as Le Pélican noir and solo — he also started a PhD at the Université de Montréal in fall 2015. A visual artist as well as an electro-acoustic composer, Morin works solo and collaborates with contemporary choreographers, videographers and several other musicians, finding inspiration for his poetic creations in the processual components of traditional and sacred music. Pushing the boundaries of abstraction, these expert improvisors in analog modular and digital synthesis incorporate invented wind instruments, traditional Balinese percussion, field recordings and digital signal processing into their compositions, intent on shaping a transcendent listening experience.

Okay, that’s all well and good, but what does this album sound like? The album is comprised of two long pieces — Ceremonie (20:07) and Projection cathodique (21:35). While ambient in nature, this isn’t a passive kind of ambient, but a very active, organic and highly charged sort of ambient. Ceremonie is full of crackling electronics and uneasy drones of indeterminate machinery. Over time it morphs into quasi-psychedelic Klaus Schulze territory before veering out into more experimental terrain. The oscillations employed are quite unsettling and throughout its droney demeanor, jarring events occur with some frequency in the background. Just when things seem to be humming along nicely the bottom drops out and the listener is transported to an alien construction site on some God-forsaken planet, replete with the distortion of heavy equipment until it grinds to a sudden halt.

Projection cathodique begins with a less forceful demeanor, the twinkling of crystalline high frequency particles over melodic sonorous low tones and held together with hollowish metallic drone substances. The latter sonority intensifies and echoes off in a feedback loop which morphs in myriad directions overtaking all other sonics present. There is a somewhat natural evolution to the unfolding of this piece that you just have to hear as any description fails to do it justice. Let’s just say it gets pretty dense as sonic layers build on top of each other. By its conclusion there is a return to some of the elements that began this piece and so the cycle is complete.

To be perfectly honest, I didn’t think a whole lot of the album on the first go-round, but after repeated plays the subtleties were revealed and the brilliance of the work became evident. That it was primarily released as a limited edition vinyl LP (500 copies, also available as a digital download) makes it an even more vital purchase. 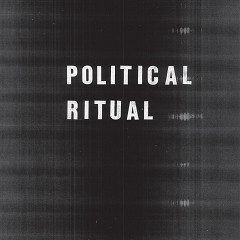 Political Ritual
… after repeated plays the subtleties were revealed and the brilliance of the work became evident. That it was primarily released as a limited edition vinyl LP […] makes it an even more vital purchase. 4/5