Featuring Jean Derome on alto sax, flutes, keyboards, melodica, percussion, objects and voice and Jaone Hetu on alto sax, melodica, objects & voice. Besides being a married couple, Ms. Hetu and Mr. Derome, have been long involved in running this, the Ambiances Magnetiques label. The couple also work on each others projects and are both members of Ensemble SuperMusique. Un Ideal is the fourth disc by the couple who record under the name, Nous perçons les oreilles, which means ‘We are the ears’. Right from the gitgo, we hear several drones, from saxes, voices and perhaps a sampler, with certain notes or phrases looped or just repeated. Both Joane and Jean play an assortment of small objects, whistles and percussive things, carefully creating a web of enchanting sounds. One of the things that this duo excel is their charming double vocals, singing and talking in twisted harmonies, embracing the joyous innocence of children’s rhyming games. I hear what sounds like a collection of wind-up toys, squeeze objects like dolls, kissy or breath-like sounds… silly and fun to listen to. Although both members of the couple play alto sax and have been involved in extended techniques, this music is more about creating short bits of odd sounds, going the music a delightful tongue-in-cheek quality. Excepté reminds me of a calliope found at a circus with a handful of kids singing along. This is music to make us smile and forget about the evil clowns in the daily news or blues. Some of this actually had me laughing out loud and that my friend is just what the good doctor ordered. 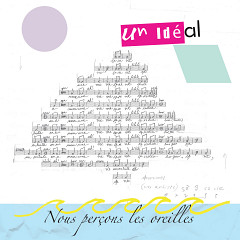 Un idéal
This is music to make us smile and forget about the evil clowns in the daily news or blues.