The Bozzini Quartet started in 1999 and developed into a very profiled ensemble that concentrates on performing contemporary music. Music from the Montréal-scene on the one hand, but also from other parts of the world. Choosing works by well-known and lesser-known composers: Steve Reich, Howard Skempton, Malcolm Goldstein, John Cage, Claude Vivier, etc. Since 2004 they release most of their programs on their own Ambiances Magnetiques-associated Collection QB-label. This also counts for their latest work: Déjà? Kojâ?, a composition of Gyula Csapó. A release that illustrates that they are not afraid of making daring choice such as choosing for a composition by a less known composer. Listening to this work, it becomes evident they had a good reason for this. A profound and penetrating composition by Gyula Csapó. Csapó is a composer from Hungary where he studied at the Béla Bartók Conservatory and the List Ferenc Academy of Music. Later he studied with Morton Feldman and John Cage. He lives and work in Canada since 1990. Déjà? Kojâ?, composed between 2011 and 2016 is a massive work in three parts. Together taking a bit more than one hour. Throughout Csapó creates dissonant layers of music in this serious and static work. In the second part the music becomes a bit lighter by the use of pizzicato and glissandi. Also he alludes here to a well-known classical composition, that I am unable to identify. Not an easy work, but a very rewarding and satisfying experience, revealing an intriguing beauty for the concentrated listener. 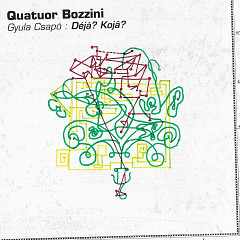