Montréal composer and sound artist Maxime Corbeil-Perron — who also works extensively with moving images — delivers two instinctive works on this richly nuanced album, one fully composed, the other improvised (but with a rigor that might suggest he’d written everything). Cubic is an acousmatic piece— a purely electronic work that can only be presented through loudspeakers, rather than actively performed — and it draws upon samples from old vinyl records as raw sound objects, although he lassoed surface noise rather than actual music, and while it embraces techno roots, this work eschews any easy stylistic tag. Corbeil-Perron crafts a dynamic series of events and elements — tiny squiggles, quasi-orchestral swells that conjure deep space, and violent sound flashes — to create an almost filmic journey. The seven movements of Polychrome were improvised during a residency at Signal Culture in Oswego, New York, and it’s tough to determine the provenance of the fast-moving vignettes with a more austere design than the opening piece, but they’re no less exciting and physical. 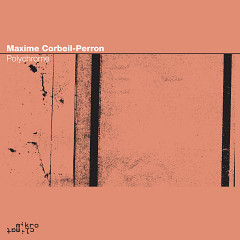