As many composers continue on a mad dash to ensnare audiences in a spiral of novel sounds, fantastic visuals and complexity, it is rare to find a composer who is interested solely in investigating the phenomena of sound itself. Musical trends have come and gone over the course of the 20th century, and yet composer Alvin Lucier has continued to produce works focused on a single idea related to sound production and the act of listening. This past Sunday, Montréal hosted Lucier as he, the Bozzini Quartet and other musicians performed his works of the past two decades.

At the age of 84, Lucier is a pioneer in the field of experimental music in post-war America. He often makes use of the properties of sound, room acoustics and the experience of hearing in his compositions. Of particular interest in this concert was the phenomenon of “sound wave interference”. This occurs when two sound waves which are very close in frequency approach the ear. The two slightly out-of-sync waves interfere with each other, and we hear this as a sort of ‘beating’ – imagine two instruments playing slightly out of tune. Though undesirable in other forms of classical music, Lucier draws our attention to this and other naturally-occurring acoustic phenomena, often with the use of technology.

Performing pieces of this nature requires painstaking concentration and hard work on the part of the player; pitches must be executed with absolute precision in order to create the desired effects. The first three pieces on the program presented sound wave interference through the context of a soloist in interaction with electronics. The first piece, Wind Shadows, featured trombonist Felix Del Tredici’s careful microtonal playing. Different rates of beating were created as he played long tones in unison with two pure sine oscillators. This was followed by Violynn, in which the Bozzini Quartet’s Clemens Merkel created a similar effect, this time against a series of six sine waves. Cellist Isabelle Bozzini then performed Charles Curtis, carefully executing double stops against long sine waves to form interference. The performers each paid close attention to detail, displaying fine control of their instrument through careful microtonal inflection.

Lucier himself performed the piece Bird and Person Dyning, in which an electric bird call interacted with feedback between speakers and a binaural microphone. ‘Dyning’ refers to heterodyning, a term from early radio transmission in which the addition and subtraction of two tones creates two new tones. With the performer required to wear the binaural microphone, the frequency of the feedback was dependent on Lucier’s position in the room. The composer moved in the space slowly and deliberately, able to create uncanny effects through even slight changes in the position of his body. At times, this included the strange experience of difference tones that seemed to form and vibrate right within the ear. The effects of space and resonance were also dealt with in the charming piece Nothing is real, in which pianist Daniel Áñez first recorded fragments of the Beatles song Strawberry Fields Forever with a wash of damper pedal, then replayed the fragments on a speaker housed inside a teapot. By raising and lowering both the lid and the teapot itself, Áñez was able to isolate particular partials within the wash of recorded piano.

The final piece of the evening, Small Waves, brought all of the members of the Bozzini Quartet to the stage as well as Del Tredici and Áñez. In this piece, the performers played long, sustained clusters tuned closely to pitches of the feedback between speakers and six microphones. These microphones were inserted in glass vessels partially filled with water and placed around the space. On occasion, stage hands would pour water between vessels, thereby changing the pitch of the feedback. At 50 minutes in length, this piece was a display of endurance. The Bozzini Quartet’s care and precision was essential to the execution of the piece; the subtleties of the work were perceptible due to their exact microtonal tuning and synchronous ensemble playing. The quartet confronted the challenges of this music with confidence, their dedication to the work evident in their effort to bring these acoustic phenomena to fruition.

In many ways, Lucier’s music can be just as challenging for the listener as it is for the performers. Little of Western art music as single-minded and static, particularly when compared with the emotional journeys in the tradition of Beethoven, Wagner or Mahler. What Lucier’s music lacks in turbulence and cinematic grandeur it gains in quiet contemplation; rather than an elaborate structure built from many parts, this music is a monolith chiselled from a single block of marble. Lucier’s music forces us to slow down, reminding us of the quiet wonder found within the everyday act of listening. 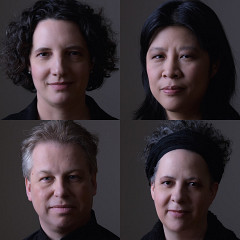 Quatuor Bozzini
The Bozzini Quartet’s care and precision was essential to the execution of the piece; the subtleties of the work were perceptible due to their exact microtonal tuning and synchronous ensemble playing. The quartet confronted the challenges of this music with confidence, their dedication to the work evident in their effort to bring these acoustic phenomena to fruition.