Although the name of Pierre-Yves Martel and Philippe Lauzier are prominently featured on the cover, the band name is Sainct Laurens and Volume 2, so the album which was called Sainct Laurens (see Vital Weekly 715) must be volume one, I reckon’. On Volume 2 Lauzier plays bass clarinet, alto and soprano saxophone and Martel viola de gamba, objects and feedback. Perhaps this too is the result of various days/hours in the studio recording together — it doesn’t say it is, nor does it say it’s a live recording — but unlike the previous release this seems less noise based. Here the two operate on a much careful level, creating small sounds with big impact. It’s sustaining and it’s sine-wave like (thanks no doubt to the use of the feedback, saxophone and viola being scraped), but there is much control over the sound here, more so it seems than on their first release. Besides these lengthy scraping sounds, there is also lots and lots of small sounds, hectic playing on the viola, uneasy playing of the saxophones (no doubt sometimes two at a time). As a whole, I think Sainct Laurens progressed quite a bit. There is more variation here, more control also and more dynamics — a fine interaction between the louder and quieter bits and in these nine pieces it’s all on this display. It doesn’t make this much easier to access; perhaps it’s even more difficult even: it takes the listener on a great journey through highs and lows, wide spaces and closed off areas. This is one to be fully immersed by. 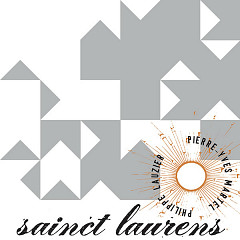 Volume 2
… it takes the listener on a great journey through highs and lows, wide spaces and closed off areas. This is one to be fully immersed by.