As mass media continues to promote music as another instantly consumed product, the likelihood of new sounds — or even older ones — being ignored because they don’t fit the style of the moment intensifies. This is especially true when it comes to improvised music. But with the holiday season looming, more committed listeners may be seeking gifts for those who appreciate challenge rather than comfort in their music. Here are some CDs from 2013 that fit the bill. They include ones by established players, younger stylists plus important reissues. (…)

Another reed experimenter is Montreal-based clarinetist Lori Freedman, whose seven improvisations on On No On are with percussionist John Heward. Related to the cerebral texture and timbre experiments of Butcher/Buck or Parker/Lytton, there’s no chordal instrument present to smooth the interface. The chief pleasure of these tracks is noting the substance of Freedman’s reed flurries and the strategies Heward pulls from his kit to parry her thrusts. Using his palms as often as sticks, Heward’s whacks or rolls are singular replies to the reed solos which frequently extend like run-on sentences, adding violent or narrowed projections to make a point. Marimba-like reverberations are called into play on those rare occasions when Freedman’s output turns legato. Overall while technical prowess is the point, by the final Improvisation 7, the narrative turns from squeaks and shudders to an almost jaunty melodiousness. (…) 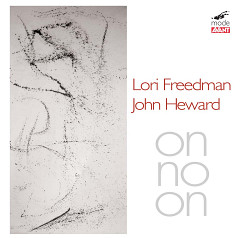 On No On
The chief pleasure of these tracks is noting the substance of Freedman’s reed flurries and the strategies Heward pulls from his kit to parry her thrusts.