Twenty years after its modest beginning, the Guelph Jazz Festival (GJF), which this year takes place September 3 to 8, has grown to be one of this country’s major improvised music celebrations. Unlike many other so-called jazz fests which lard their programs with crooners masquerading as jazz singers, tired rock or pop acts, or so-called World or C&W performers who make no pretense of playing jazz, the GJF continues to showcase committed improvisers in sympathetic settings including during the fourth installment of the dusk-to-dawn Nuit Blanche. (…)

Outstanding double bass work from closer to home is on tap during a free Market Square afternoon concert that same day when Montréal bassist Jean Félix Mailloux performs his compositions from Bomata Arômes d’allieurs Malasartes mam 016 with his associates, percussionist Patrick Graham and Guillaume Bourque playing clarinet and bass clarinet. A trio which has internalized “scents from elsewhere” — the translation of the CD title, Bomata’s unhurried performances reference various ethnic styles without becoming the subservient to any. A fine instance of this mixing is Cardamome when cross pulses from Graham and second drummer Phillippe Melanson move contrapuntally alongside a walking bass line, providing a trembling rhythm to Bourque’s mid-range, Klezmer-like overlay. The reedman’s mercurial high-note skill is on display on Shaman, with the bass taking on a slinky oud-like resonance and guest frame drummer Ziya Tabassian adding hard thwacks to toughen the beat. Yet as intense as the bassist’s and clarinetist’s improvisations become neither disrupts the basic thematic flow. Pianist Jérôme Beaulieu, who joins Bomata on a couple of tracks, is a little too decorous, creating a crystallite Nordic feel which clashes with Bourque’s ney-like sound on Nuit Blanche. Although with 13 tracks, sameness sets in at points, most performances argue well for the band’s continued evolution from this 2012 CD. Chinoiseries could offer one path, with the arrangement open enough to allow the reedist some altissimo smears even as the theme stays linear, with the end product suggesting both Eastern European concertina-like riffs plus a swinging jazz-like interface. (…) 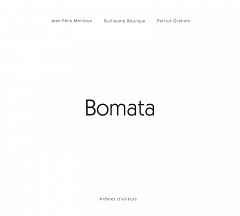 Arômes d’ailleurs
A trio which has internalized “scents from elsewhere” — the translation of the CD title, Bomata’s unhurried performances reference various ethnic styles without becoming the subservient to any.