Nipping at the heels of the gripping and fugue-state-inducing eclecticism of the first No Type compilation, The Freest of Radicals, comes this incredible debut CD release from Montréal sound artist Magali Babin. Born in 1967, Babin combines linear yet sculptural metal-based sound pieces with a true flair for dynamism, abstraction and otherworldliness. Although Chemin de fer is the first appearance of material of this nature by her, she has apparently worked with soundscapes featuring the recording of metals for more than a decade now and, possibly as a result of this time-served honing of her skills, her utter control of the proceedings here is totally compelling. The constructions on this album were originally recorded for a radio show in Canada but shelved prematurely and, it would seem perhaps, unfairly. I have to admit I expected some element of coldness and isolation from this disc; but warmth, confusion, playfulness and apprehension all combine in Chemin de fer’s 50 minute journey and prove me wrong. At times, as on the opening Triturations and on E, the musical palette is of some vast, partly steam-driven and partly clockwork organism, respiring and shuffling at the limits of exhaustion; elsewhere, the album title is interpreted near-literally, as with the seemingly endless electrified rolling stock effect of L’entonnoir. These are impressive, intimate soundworks that cross the boundaries of acousmatic music, free improvisation, the pure sound of the gamelan, and early electronic composition methods, and yet retain a recognisable fingerprint that appears to be Babin’s alone. Let’s hope another decade is not allowed to elapse without more from this unique talent. 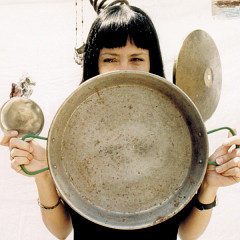 Chemin de fer
… a true flair for dynamism, abstraction and otherworldliness… her utter control of the proceedings here is totally compelling.