Two more of the items from the & Records label of Montréal which arrived here 20 January 2012. The record Ave W (&10) is credited to Tiari Kese, who apparently plays all the instruments — keyboards, French horn, electronics and samples, but it’s more likely to be all the work of Michel F Côté, who’s a Canadian electro-acoustic composer. A biography of alleged Bulgarian Tiari Kese can be found online, but with its Stockhausen, Beatles and Debord connections it’s all too good to be true and is probably just another internet hoax. The record does have one glorious track title, Dreams of Spartacus’s Spacecraft, but I mostly found it a rather turgid listen, directionless and shapeless digital layers of drone that amount to less and less the more they’re piled up. The instrument-playing has been processed and denormalised to an extreme degree, sucking the humanity out of everything until we’re left with echoed and orphaned horn tones floating aimlessly on a sea of samples, light distortion and glitch.

The City Wears a Furry Hat

Even less enjoyable is Solitary Pleasures (&records &15) by Fortner Anderson. It comprises several short 90-second vocal recits by the poet Anderson while accompanied by electro-acoustic noise played by a non-jazz trio of Alexandre St-Onge, Sam Shalabi, and Michel F Côté again, this time playing the drums. The release accompanies a book of poems published at the same time. We’ve encountered Fortner Anderson before in TSP15 where we noted the baffling Six Silk Purses, recordings of his spoken word exploits provided to sound artists to add their musical interpretations; in fact the same musicians were on that release too. Fortner’s short couplets are expressed here in diary form, each segment beginning with a calendar date announced in solemn tones, before proceeding with his free-form observations such as “I had forgotten the calculus of transcendence…”, alternating with mini-stories about life in the city and the characters he meets. It all feels oddly old-fashioned, like one of the forgotten Beats. Fortner attempts some jazzy syncopation in his delivery, even as the music drags itself along like a three-legged dog on a hot afternoon. Kenneth Patchen it ain’t. 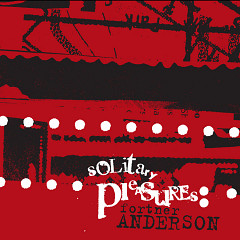 Solitary Pleasures
It all feels oddly old-fashioned, like one of the forgotten Beats.