From a different perspective, the next set also faetured three strings but was completely different. The last set of Day 2 featured a quartet led by Jean René on viola with Joshua Zubot on violin, Nicolas Caloia on acoustic bass and Pierre Tanguay on drums. The sound of this ensemble was like a twisted string quartet with the drums as an equal part. Whereas Zorn’s string players were articulate and tight, this quartet had a looser earthiness, which was wild and chaotic at times. The quartet blended partially written material with frenzied sections and sparse moments as well. Mr. René’s writing seemed to draw from folk/rock as well as the odd classical influence. Sometimes all three strings buzzed together intensely while longtime AM drummer Pierre Tanguay balanced both rhythmic and subtle melodic counterpoint. What was surprising about this set was that you never knew what direction was coming next. Both Josh Zubot on violin and Jean René on viola took a number of inspired solos while the group interplay that was filled with many odd twists and turns. This was music that will take some time to get used to so it is probably a good idea to get Mr. René’s disc on AM (sic!) and dig in deeper. 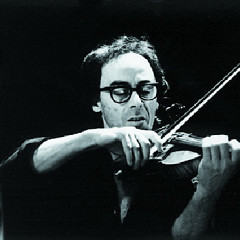 Jean René
What was surprising about this set was that you never knew what direction was coming next.