One of the better & stranger sets last year (2010) at the Victo Fest was by a quartet featuring Denley / Lauzier / Martel / Myhr, an international cast of gifted improvisers. Mr. Denley (once a member of Machines for Making Sense from Australia) and Mr. Myhr were also part of the Trondheim Jazz Orkester, who also performed one of the better sets last year. Electric bassist Éric Normand played at Victo last year as well in a different set. This disc was recorded right after the Victo Fest in May of 2010. Since all of these musicians prepare their instruments, the sounds are going to hard to pinpoint, as in who’s doing what. I remember the quartet set at Victo quite well since it was one of the few sets to employ that lower case aesthetic. This disc also sounds like that ultra careful, restrained, spacious improv that some of us have come to enjoy over the last decade. This music breathes and takes its time to unfold. This is a collection of different drones and long tones that shimmer softly. Kim Myhr, who was the leader of the Trondheim Orkester at Victo, had a tableful of small objects that he played while he occasionally plucked or bowed his table-top acoustic guitar. I hear the sound of scientists or craftsmen quietly creating their own new environment or world. The nuance of every sound is carefully placed on the canvas of silence. At times it is hard to tell that there are five musicians involved, yet the outcome is striking and completely focused. This music forces us to stop and listen closely since we might otherwise miss a fragment that is integral to the overall tapestry. Consistently fascinating if you take the time to explore. 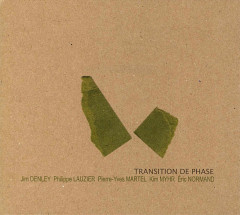 Transition de phase
Consistently fascinating if you take the time to explore.