French-based percussionist Le Quan Ninh has a completely unique approach to playing his bass drum, if you get a chance to see him live, you know what I mean. Still his sound is also quite distinct. This duo disc was recorded live at Coop Paradis in 2009 and it also features Quebec-based reeds wiz Jean Derome. Both of these men concentrate on small yet focused sounds. Mr. Derome at times recalls early John Zorn when Zorn worked with mouthpieces, bird calls & a cup of water. The duo works together extremely well, their odd sounds often blending together marvelously. The brittle bent notes of the sax and the cymbals rubbed on top of the bass drum often sound very similar, so it difficult to tell who is doing what. Derome also plays whistles and toys at times, occasionally adding bits of humor or other surprising sounds to the mysterious environment. Well recorded and able to cast a spell upon all those take the time to listen closely without distractions. 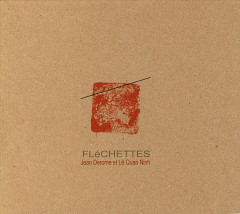 Fléchettes
Well recorded and able to cast a spell upon all those take the time to listen closely without distractions.