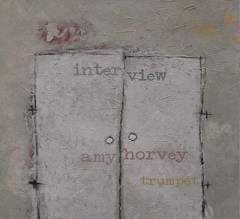 Interview
Amy Horvey tackles exciting and provocative repertoire on this offering and nails all of it.