This is an extraordinary collaboration between artists from across the world. Brady’s rhythmic jazz-influenced North American chamber music is paired with the dynamic, take-no prisoners virtuosity of Australia’s Topology ensemble, based in Brisbane. Brady and Topology began collaborating in 1997, and toured Australia together in 1999, when the idea for this project was born. The CD presents some of Brady’s most exciting and passionate chamber works, in unrivaled performances by one of the finest new music ensemble of our time. SCAT (because we all have voices and stories to tell) takes its title from the strongly jazz-influenced first and third movements, and also from the unusual use of the musicians speaking voices as part of the music in the second and third movements. In the final movement, the musicians have to tell their life-story in 30 seconds, while playing their instrument as an accompaniment, ‘scating’ their personal histories. Lighting Field was composed for the 1999 Brady/Topology Australian tour, and consists of two movements. Darkness pairs the musicians against an electro-acoustic sampler part (playing processed electric guitar samples) to create a quietly foreboding atmosphere. Illumination brings the ensemble together for one of the most exciting rhythmic and dramatic movements that Brady has penned in recent years. Dark Matter (Primal Pulse) was originally composed for the Philadelphia ensemble Relâche, and is a small-scale concerto for viola, accompanied by 8 musicians. The work is quiet and introspective in character, and is given a beautiful and detailed performance by Topology’s violist, Bernard Hoey. Struck Twice By Lightning uses some of the same set of electric guitar samples as Lightning Field, but creates a totally different musical universe with them. Struck Twice By Lighting is about rhythm and articulation, about connecting the dark, visceral sound of the viola to the chiming, clangorous, pulsing sound of sampled electric guitars. 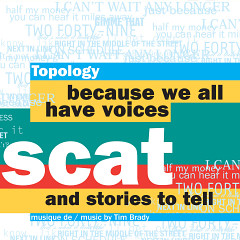 Scat
This is an extraordinary collaboration between artists from across the world. Brady’s rhythmic jazz-influenced North American chamber music is paired with the dynamic, take-no prisoners virtuosity of Australia’s Topology ensemble, based in Brisbane.