This recording of the first-ever performance by René Lussier, Martin Tétreault and Otomo Yoshihide demonstrates the major pitfall in recording improvised music: the lack of visual context. One of the pleasures of a live improvised performance lies in watching the musicians interact, and certainly this was the case when Lussier, Tétreault and Otomo met on stage at the 2008 Victoriaville festival. The three all have extensive histories playing together in duos, but this was the first time the three had played together at once. The performance was a bit patchy, as much of the time one of the three was searching for a way to jump into the musical dialogue of the other two, especially so when Otomo and Tétreault were on turntables and Lussier was on guitar. At its best moments, however, there is some truly satisfying three-way interaction. 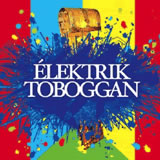 Élektrik toboggan
At its best moments, there is some truly satisfying three-way interaction.