The avalanche of noise that erupts as the play button is depressed, while superficially exciting, made me ask, “Isn’t this the same ‘one, two, three, go!’ with which countless other improvisers open their sets?” Prepared as I was to be under-whelmed after further decent-yet-familiar free-improv gesticulations, I was awestruck once it came to the forth and fifth tracks, excerpts from the duo’s performance at L’Auberge des Quatres Vents. The first of the two charts the evisceration of new age music, beginning with fierce tinkling bells that grow more frantic over a Fripp-like, e-bowed guitar chorale. Palardy Roger begins a throaty chant (calling to mind Sidsel Endresen as much as Diamanda Galas), alongside pulsating metallic sheets emanating from Frith’s guitar. Additional surprises follow. On the next track, industrial drone and clatter accompany Frith’s breathy ad hoc croon. Later, amidst a flurry of soft cymbals, a slide guitar solo emerges. The piece bridges the gap between early Sonny Sharrock and Einstürzende Neubauten (especially the Blixa-like vocals). These unexpected flavours serve as a reminder of how exciting it is to hear improvisers exercise their freedom to borrow ideas from outside of the standard free-improv lexicon. 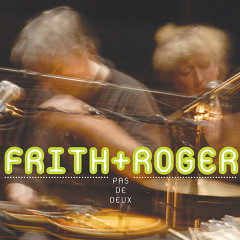 Pas de deux
how exciting it is to hear improvisers exercise their freedom to borrow ideas from outside of the standard free-improv lexicon.