An obscure and unfortunately neglected record by key Ambiances Magnétiques player Michel F Côté, 63 Apparitions (&records, 2004) was originally written as a choreographical piece performed in Montréal. While I have no idea what the visual counterpart may have been or the significance of its title, I do know that this is stunningly beautiful music that deserves to be reappraised. Composed by Bruire frontman Côté and sounding very much like a continuation of his work in Klaxon Gueule, 63 Apparitions also features the playing of Christof Migone and labelmate Martin Tétreault on various objects, as well as the unrecognizable voice of AM staple Diane Labrosse. The fifteen brief tracks here all begin and end quite awkwardly, as if a continuous recording had been separated into pieces and re-shuffled. Côté’s main axe is the drum, but you’d be hard-pressed to tell from this strange melange of percussion, electronics, piano, vocal manipulations and orchestral samples. Everything sounds remarkably organic, blending the electronic and the acoustic into a fluid whole.

Tracks 1-8 puff along in a kind of jerky stop-start mode, reaching interesting plateaus but never quite building to a climax. Even with the intrusion of classical music by track 9, there is never the sense of resolution, as what sounds like a melancholy excerpt from one of Gorecki’s string quartets — though I’ve read only Cage and Satie listed as sources — is quickly eclipsed by Côté’s trademark electronic gurgle and twittering sine waves. A sample is never allowed the freedom to play for more than a few phrases at a time, deferring importance to the insect-like buzzings of Côté’s setup. Not a quoter, Côté’s use of prerecorded music turns those fragments into dreamlike snippets from elsewhere, fully absorbing them into his own aural narrative. He gradually effaces the sound of strings and woodwinds beneath oscillating tones and rough scrapes; noises equivelent to fireworks (track 1), accordions (track 8) and airplane motors (track 11) prevent the music from reaching a maudlin conclusion. And it is always the orchestra that sounds bland and repetitive, never the “lesser” instruments of the computer and the mixing board.

As I walked around Yonkers, NY’s Untermyer Park today, a space I’ve known intimately for the past fifteen years, I listened to the snatches of melody 63 Apparitions offered up through my headphones. Untermyer is filled with ruined and decaying buildings, overgrown vegetation and crumbling faux-Roman architecture. I couldn’t help but thinking that Côté’s music provided my stroll with a perfect soundtrack, appearing before me as the fragments of a damaged landscape whose former splendor was now buried beneath layers of grime. Far from robbing the original of its beauty, the new elements accumulating atop it had turned it into something even more beautiful, with so much texture concentrated in each surface that I broke off a piece of the pool’s flooring with the heel of my shoe to pocket and take home with me. And I again came to the realization that music is that which helps animate the mute ugliness of the world around us: one view, a thousand notes. 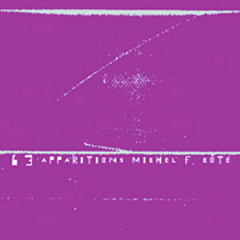 63 apparitions
Everything sounds remarkably organic, blending the electronic and the acoustic into a fluid whole.