A few years ago Quator Bozzini — the string quartet of the sisters Bozzini — released a cd with Different Trains of Steve Reich. Disappointing nor because of the musicianship of this excellent quartet, nor their interpretation of this work. But why this work, this composer? Personally, I’m not waiting for once again a registration of well-known works from well-known composers. So I’m happy they focus now on not so familiar composers. The cd opens with two works from the English composer Howard Skempton, namely Catch (2001) and Tendrils (2004). Succeeded by three works by Jo Kondo: Hypsotony (1989), Fern (1990) and Mr Bloomfield, His Spacing (1973). Both pieces of Skempton are sweet elegant compositions. Especially Catch with its canonic structure, is a meditative piece drenched in medieval atmospheres. Tendrils meanders pleasantly along, albeit a bit too long. The works of Japanese composer Kondo continue in more or less the same tempo, but in contrast with the compositions of Skempton, Kondo’s works are very dissonant from start to finish. This is a interesting selection of compositions. In their similarities and differences they make an inspiring anthology, carrying all the string quartets composed by respectively Skempton and Kondo. 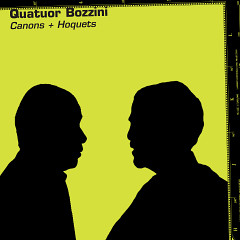