New great stuff from Michel F Côté (Klaxon Gueule, Bruire, Flat Fourgonnette)! Although the compositions are teamwork, the music carries a clear stamp from mister Côté who did the mixing and montage. Côté (drums, pocket trumpet, arrangements) is in the company here of Bernard Falaise (electric guitar), Alexandre St-Onge (doublebass) and Jesse Levine on electric organ. Levine is the new element on this CD. A young jazz musician from Boston, who plays some very demented and weird organ. He played in the klezmer band Black Ox Orkestar, and also with noise-rock artists Fly Pan Am and live Hip-Hop ensemble Kalmunity. With the impro-sextet Balai Mécanique he recorded an album released on No Type in 2003. Listening to (juste) Claudette what strikes me first is that again the music has a certain slowness and primitiveness that characterizes also earlier work of Côté. Strange instrumental rock, that moves ahead with a slow but steady groove. Within and in contrast with the simple beat or groove played by Côté and St-Onge, we hear some very free and distorted playing from above all the guitarist and organ player. Very amusing. But from time to time I wish the drummer would also take part in the madness of Levine and Falaise, who play very aggressive, edgy and far out. One has the feeling this music has its roots in rock and blues but is never sounds like that. In the track Descente Central they take a break and they show themselves from a more serious side with a rendition of Morton Feldman’s String Quartet (II). The CD closes with a composition of Vincent Gallo. 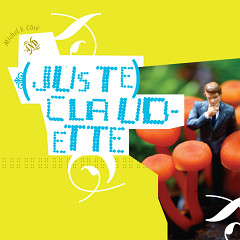