A new cd by Guido Del Fabbro (1980, Montréal). He is a core member of Fanfare Pourpour, who did a fantastic program with Lars Hollmer recently. Also he takes part in Rouge Ciel and Concorde Crash. In 2003 he recorded his first solo album (Carré de sable) for Ambiances Magnétiques. With Agrégats his second solo effort sees the light. For this one Del Fabbro composed and arranged a new set of 13 compositions composed between 1999 and 2007. Although they do not make up an suite, the pieces make up very naturally an organic whole. The pieces are played by an ensemble of 10 musicians playing accordion, clarinets, violin, flutes, trombone, cello, drums, percussion and some electronics and bird calls. He recruited musicians from very diverse backgrounds for this project. Postmodern or deconstructionist strategies have no grip on Del Fabbro. His compositions are mainly folk-influenced, with classical touches resulting in a romantic and melodramatic music with nice harmonies and melodies. Being avant garde is not what Del Fabbro is aiming at. Points or reference maybe be early Conventum or a Belgian group like Julverne from the late ‘70s and early ‘80s. Moissine is the exception, being an collective improvised interlude that is very much NOW. I wish the album had more of these moments. But Del Fabbro succeeds in evoking the ‘old’ music he is dreaming of and knows how to revive it without sounding nostalgic and without using cliches. On the other hand I must say that I hope the Del Fabbro’s next cd will contain more daring compositions. 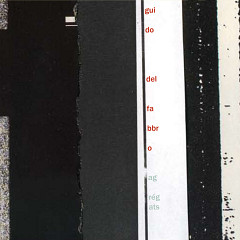 Agrégats
His compositions are mainly folk-influenced, with classical touches resulting in a romantic and melodramatic music with nice harmonies and melodies.