This recording starts with a countdown to blastoff, which morphs into a news report of Yuri Gagarin’s first trip in a spaceship, then a rendition of The Tennessee Waltz, a snatch of dialogue from Star Trek and a sales pitch for a how-to guide to playing the organ. That’s just the first minute or so of this very witty travelogue through the fevered recombinant imagination of Martin Tétreault. Snipettes! began life as a 250-copy limited edition cassette in 1992 and is now being reissued on its 15th anniversary, and if you missed it the first time around, you don’t have an excuse now. Then, as now, anything Tétreault does is of great interest. 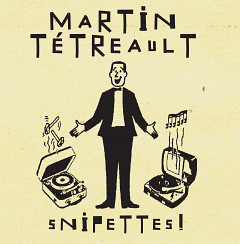 Snipettes!
anything Tétreault does is of great interest