After a number of ensemble projects for the Ambiances Magnétiques label, GO (the letters stand for Guitar Obsession) reasserts Tim Brady’s stature as a guitarist. The album is split into two halves. First, we have four pieces by Brady, among which the title track is the highlight. A multitracked piece with criss-crossing loops and a feverish pace, it has all the structural complexity and immediate virtuosity Brady has gotten us used to. Yellow, Add Green is also noteworthy for its unusual devolution from trashy pyrotechnics to soulful blues licks. Frame 22: Switch, for guitar and live electronics is less striking and surely not unique, despite some inspired passages. The second half of the album features guitar pieces written for Brady. Jean-François Laporte’s Le Chant des baleines calls for an electric guitar with metal extension and resonator, played with a bow, and accompanied by an electroacoustic tape part. It is a haunting piece, although it remains somewhat cold. Ironically, Alexandre Burton’s Unplugged is another story. In this piece, Brady plays a de-tuned, unplugged electric guitar linked to a computer running Max/MSP. The human component of the piece draws from all the possibilities left by the unamplified instrument, including its percussive potential, while the computer manipulates and multiplies his efforts, with surprising results. Laurence Crane’s Bobby J is a quiet, reflexive resonant piece, strongly reminiscent of Chas Smith’s works. For anyone who may have missed Tristan Murail’s Vampyr! (already recorded by Brady for 10 Collaborations), here it is again, recorded live, a flashy metalesque piece of serious music. GO is Brady’s first guitar-centric album since 20 Quarter-Inch Jacks and, just for that reason, deserves investigation. 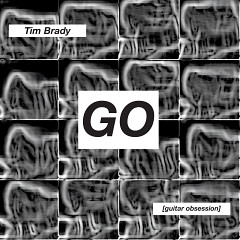