Written for two narrators, two soloists, to percussionists and a thirteen-piece self-conducted mixed choir, this album is an highly emotional mixture of opera and experimental text declarations. This Montréal-based composer tells a story abot Lui, who is dying, scared and delirious, Elle, who acts as an ironic witness and Choir, who represent the others that will die one day. The interaction beween these groups can be considered Meredith Monk meeting ritual chants and chamber music neeting zen improv acoustics. Such projects can’t be heard often, an interesting mixture of styles and ingredients. Especially the calmer and religious second half of the album is beautiful. 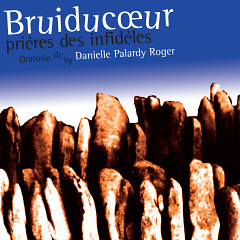