A totally unexpected avant-prog monster! This is a very young band with four multi-instrumentalists covering violin, turntable, electronics, mandolin, piano, keyboards, guitars, drumkit, trumpet, flugelhorn and percussion in various combinations. This rich timbral palette is deployed in the service of thorny, ambitious constructions ranging across an Art Zoyd / Univers Zero sound alternately subdued and much more aggressive than these groups, buoyant Miriodor jaunts, pastoral fusion, pyrotechnic prog-fusion, crazed free jazz violin solos, pedestrian avant-jazz, post-Kagel deconstructionism by way of free improvisation, etc. While heavily tending towards a somewhat conventional jazz or prog foundation, this group is extremely unusual in the extent they use harsh and experimental elements. It hits the avant-prog prototype dead-center and will be a serious revelation for fans of the genre. With its intricacy, playfulness, and occasional manic abandon, it carries on the abandoned tradition of Debile Menthol.

I can’t help but feel that post-modernism this brash and fabulous can only come from Quebec, and, indeed, Rouge Ciel represents something of a new generation emerging from the astoundingly fertile Musique Actuelle scene in the Montréal area. The label, Monsieur Fauteux, is a subdivision of Ambiances Magnetiques and the album was even produced by the great Joane Hétu. Even with Rouge Ciel’s much stronger rock emphasis, the stylistic collages are rather similar to Jean Derome et les Dangereux Zhoms (a special favorite group of mine), rarely adapting an idiom wholesale. For example, even with a handful of truly out free jazz violin and piano solos, the rhythm section never shifts into a free jazz mode, sticking with fairly simple and regular accompaniment instead. It’s this kind of rootedness in easily grasped structures combined with adventurous elements that defines that happy medium most avant-prog fans yearn for. For all their brashness and variability, Rouge Ciel spend a lot of time in some prog or post-jazz comfort zone or another, great places to be when it’s done this well. Stepping back from the specific aesthetic choices of the ensemble and considering a wider musicological context, maximal postmodernism as a general possibility that Rouge Ciel nicely exemplifies is rather rare and in itself unlikely to be anything less than thrilling, but there’s a serious gap that deserves to be acknowledged between thrilling and transcendental. Rouge Ciel and Dangereux Zhoms don’t reach the transcendentalism of the two pinnacles of maximal postmodernism looming above all others, A.D.D. Trio and Gregg Bendian’s Interzone, and it’s easy to see why: Rouge Ciel’s postmodern synthesis is primarily quotational and cumulative, whereas those two towering singularities of creative music rarely leave a trace of their sundry atomic inspirations. It’s a difference between escaping categories and multiplying them. Correspondingly, Rouge Ciel doesn’t attempt to travel the other historically witnessed path to transcendental maximal postmodernism, the jump-cutting of Naked City. These theoretical remarks are only meant to put my roiling enthusiasm for Rouge Ciel in perspective and avoid hyperbole. The bottom line is that this disc knocked my socks off and I had to play it three times in a row because I was so flabbergasted to discover such distinctive and elite avant-prog!!! They have one earlier release from 2001 I’ll be checking out ASAP. 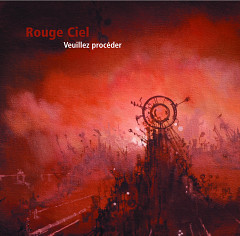