It’s too bad that this CD doesn’t come with an accompanying video of Tétreault and Otomo performing, for that would have made what the two turntablists actually do much more transparent to the uninitiated. The eight pieces on this album were recorded during a tour of France in 2003, and anyone who saw the duo in Montréal in October of that year can attest to the musical (and comic) genius of these two master improvisers. The turntables themselves are used as instruments, while whatever vinyl is used is apt to be employed as a weird plectrum or drumstick as anything else. Shoes and coats might serve the same purpose. One more thing-play loud! 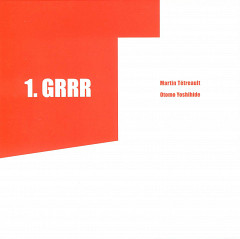