Albums like Puce à l’oreille divide the audience into three groups: those who get it, those who don’t get it and think it’s ludicrous, and those who don’t get it but are willing to believe that someone out there probably does. I like to think I’m in camp three, though there are times when I start to look toward the second camp and suspect that they may have a point. Then I realize that I’ve learned more about myself and my own tastes while listening to Puce à l’oreille than I did about the album itself.

The disc is the product of an afterthought: Mélanie Auclair, a singer and cellist, wanted to explore music with several artists who had influenced her over the years. What began as an informal jam session evolved into the tracks we hear on the album. However, this is no Phish concert; this is minimalist, modal jazz, world music, ambient acoustics and verbal noises that don’t pass for lyrics in the Western world. As such, I’m reluctant to dismiss the album out of hand because it’s clearly not targeted at my own personal demographic — and especially as I enjoyed a good deal of it. Auclair is a wonderful cellist with an incredible experimental streak and the musicians she has surrounded herself with are all highly skilled, if unconventional. The raw string duets between Mélanie and Eric Auclair on Puce à l’oreille 4, and her pairing with saxophonist Charles Papasoff on Puce à l’oreille 5, engage me because these are instruments I can relate to, albeit played in nouvelle (to me) ways. But as the album veers into the occasional vocals, which are really a barrage of guttural noises somewhere between sex and death, and which at one point resemble vomiting parakeets, I’ll admit that I can’t help but glance back at camp two and wonder if they’re the ones who are missing something, or if I am. 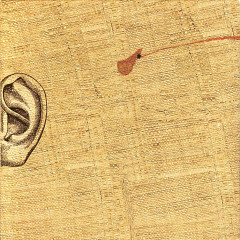