Unison Rituals is Brady’s second release on Ambiances Magnétiques and number x in a series of releases on Apparition, Justin Time and other labels. Brady is a composer and guitarist from Canada who is lucky to have many of his works available on lp and cd. He composed chamber and orchestal music, plus electroacoustic music. Also he created works for theatre, dance, etc. Since the beginning of the 90s Brady has his own ensemble: Bradyworks. Brady produced several cds with this ensemble. Here on this new cd, they play three of the five compositions. But first things first. The cd opens with Unison Rituals, a strong and powerful piece for saxophone quartet, playing 6 different saxophones. This composition shows Brady’s affinity for minimal music. Parts of this work are very similar to Music in twelve Parts by Philip Glass. But Brady does not straightforward copy this unisonic, melodic and harmonic music. His version of it is full of twists and turns, complex rhythm changes. This makes this work comparable to the work of the long defunct belgian group Maximalist, who also tried to maximile or totalize minimal music. The CD continues with three works Double Helix, Two chords less than a Blues and Escapement that are - as said - performed by the Bradyworks ensemble. Instrumentation differs from piece to piece. We hear piano, percussion, cello, alto, baritone and soprano sax and electric guitar (in Escapement only). The first work is a post-minimal composition using jazzy syncopations. Two chords less than a Blues is a totally different work. With strong percussive parts at the beginning and end. Escapement is the only piece where Brady is also present as a player (on retuned ‘scordatura’ electric guitar). A quiet and lyrical piece. Jazz is not far away here. With solos for guitar and sax. The CD closes with Sound off played by some 100 wind instruments and 8 bass drums. Originally a 45-minute work, it is condensed here in 12 minutes. It is meant to be played outdoor as you can imagine. Starts very silently with unison playing, but gradually moves towards some very dissonant and noisy outbursts. Impressive. Because Brady departs from the (post-)minimal tradition and stays within tonality you might expect he is to be classified with New York down town composers like Michael Gordon and other of his Bang on a Can colleagues. But his work - on this cd - give me the impression that he is much more an ‘european’ composer. This is also often the case with french-speaking composers from Canada. The music has a romantic, lyric feel and mood. But why not say this typifies (some) Canadian composed music. 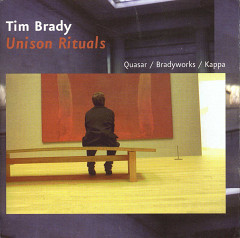 Unison Rituals
The music has a romantic, lyric feel and mood.