This is something of a concept album. The liner notes — after a musician’s roll call, natch — begin with a small note from vocalist Marie-Hélène Montpetit about a hotel by the sea, where songs batter against memories of departure. If you’re a victim of the language barrier — the vocals here are all in French — there’s nothing to worry about: the mood is accurately (almost too plainly, given that some tunes come across as being as formulaic as stadium rock) conveyed by the fine playing on show here.

Musically, the album doesn’t break much out of the smooth jazz mode. By smooth, I don’t mean Kenny G: I mean smooth in terms of that laid-back, late-night languor that suffuses many discs. Nobody appears to be working too hard here, but that’s fine in the surrounds; nobody really expects Ketil Bjornstad to be turning all Jerry Lee Lewis on us anytime soon, either. Meditative is the key word; Blues du troisième étage<|b> features some fantastically introspective contrabass work by Normand Guiltbeault that really guides the tune. For the most part, Pierre St-Jak’s piano dominates the tunes. Occasional incursions by guests (L’hôtel… are normally a four-piece, here expanded to eight) add fire and polish to the action — the song Un homme à la mer sounds like mid-era Pink Floyd gone jazz with some fantastic harmonizing — but mostly, it’s the almost-Debussy tones that guide the album. Occasionally, unluckily, it’s towards a slightly soporific destination.

The more lively tunes here bring to mind John Zorn’s Masada work; Réparitition des tâches certainly wouldn’t have been out of place on the Bar Kokhba album, for example. It’s a shame that the ensemble doesn’t stretch to this sort of rapture more often; sure, dour and moonlit is nice, but there comes a time when what’s really needed is a bit of fire-fuelled gypsy violinist dancing. It’s something that seems more necessary as the album moved on: the more the piano tends towards angularity, the more I craved reckless release, only to be denied it — a shame.

Overall, Chant des adieux, chant de la solitude is a classy affair. To be brutally superficial, for those who don’t speak French, it’s a good background disc with enough slow-burn jazz listenability to see you through a couple of bottles of wine. It’s a bit Windham Hill at times, but if you’re able to worm your way past the “Where’s Ute?” feeling, investigation will reap rewards. Not an album for all seasons, but one that I can see getting more than a few revolutions in the late evenings around my way. 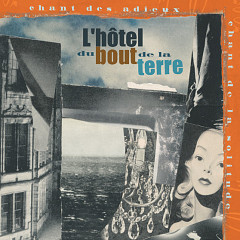