La vie qui bat: Chevreuil (“The Beating Life: Dear”) was released at the same time and on the same label as La vie qui bat: Chèvre, but the two could hardly be less alike (except for the fact that they both feature guitarist René Lussier and drummer Pierre Tanguay). While Chèvre contains dense and serious free improvisations with Lussier playing acoustic guitar, Chevreuil is mostly made of written songs and/or prepared improvisations with the same musician on anything but that instrument. It shows the clownish side of the duo, an approach strongly reminiscent of Lussier’s work with Jean Derome during the 1980s in Les Granules. When the pieces are not thoroughly written like Salade du Chef (“Chef’s Salad”), La toune dure (“The Tough Tune”), or La vie qui bat they are at least planned ahead. Of this latter category the best example is the suite Le Catalogue, made of very short improvs on predetermined animal-related themes. Other tracks like Le Chameau (“The Camel”) and L’Éléphant (“The Elephant”) follow the same path: humorous improvised impressions. Lussier favors the electric guitar and the daxophone. Written pieces are songs in a similar vein to what the Derome/Lussier duo recorded: dismembered, funny and never meant to be taken seriously. Vocals are an integrated part of the instrumentation, which is not the case on the other CD. This one feels like two friends kidding around — two very talented musicians-friends, that is. Those looking for engaging improvisation will be disappointed, but fans of Lussier’s lighter side will find La vie qui bat: Chevreuil a suitable follow-up to Les Granules’ Au royaume du silencieux. 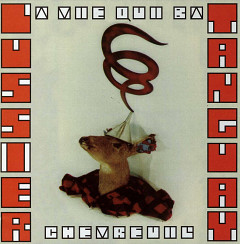 Chevreuil
… dismembered, funny and never meant to be taken seriously. This one feels like two friends kidding around -- two very talented musicians-friends, that is.