Rouge Ciel is a Canadian musical ensemble that — thankfully! — has very little in common with Godspeed You Black Emperor. It’s a relief, certainly, for those who’d come to believe that po-faced instrumental thunderstorming was the only kind of music coming out of Quebec; this is a much different kettle of fish.

Rouge Ciel’s sound is open, and almost clownish to a certain extent. Freakout guitars mix with mandolin, melodica, percussion and turntables (amongst others) to create something with a distinct pastoral feel. In the same way that some albums just have the sound of the barn in them — George Winston’s Autumn, for example — this album speaks of nature. Acoustically, it’s organic, but there’s a sort of hale-and-hearty feeling here that sustains the band’s endeavours when they lapse into the formulaic.

The group’s approach to music — two-fisted, occasionally jaunty with rich, leading melody rather than atonal peregrinations — reminds me of some of the Michael Nyman Band’s finer moments: Les Fardeau D’Hier, for instance, sounds like a piece that’s just waiting for a suitably enigmatic Greenaway film to accompany it. There’s that same sense of exuberance, of “here we go!” beginnings and loud concerts that a good ensemble can produce — and it’s this that makes Rouge Ciel’s disc fly. Jumping around like a genteel Mr Bungle, they cover a number of styles in the course of each song — Cétakili covers barrelhouse, jazz and porno-stylings, as well as a good line in tension-guitar — to ensure that interest is held. Certainly, this is freak-out music without the pervading paranoia, though I’d shudder to think what an oft-repeated dose would do to the listener’s perceptivity; this is pretty dense stuff, and it really does take concentration, occasionally, to break out of the world it creates — it’s that immersive. The world evoked by La vigne de Mathilde, for example, sounds like the sort of Goreyesque place you’d rather avoid, if given the choice; the images created instill a distinct sense of discomfort.

It’s a bit of a cop-out to refer to music as filmic, but Rouge Ciel’s sound is filmic, only not in that Morricone canyons-and-the-stranger kind of way. This music is music of action; music for people, not Grand Places. It verges on Koyaanisqatsi-era Glass in terms of frenetic appeal, only at a hoe-down. 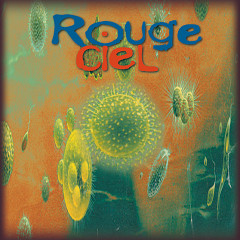 Rouge ciel
This music is music of action; music for people…