If you’ve ever wondered what would happen to musical films if you were able to get into the projectionist’s booth and play around with the pacing and speed of the reel, then this is the CD for you. Recorded as part of a 1999 festival, the album features Derome’s bizarre songs, accompanied by Guillame Dostaler and René Lussier — two musos who sound like they’ve escaped from the Tom Waits Camp For Musical Strangeness and gone on the lam to Canada. It’s strangely compelling; there’s fantastic guitar work that brings Marc Ribot’s multi-faceted approach to mind, while carnival synth and a generally fractured approach to backing a singer flesh out the songs. Certainly, Derome’s voice, as powerfully evocative as it is, would be nowhere near as successful without the freakish-sounding tunes it rides. If PJ Harvey went to the circus, she couldn’t get this level of strangeness out. Vocally, recitative is pretty much the way the show goes here. Ah Non! Anna features an intruding robotic voice, while elsewhere, Derome’s voice runs the gamut from teasing to the terrified, while familiar tunes float by in the background — I swear that Ton Grand Nez borrows from The Doors’ Love Her Madly. And somehow, amid the confusion, it works. You don’t need to speak French to enjoy this album; the pacing and the feel of the tunes is such that they’re enjoyable for reasons other than those of lyricism; however, I suspect that you need a better handle on the language than my schoolboy-level to get the full effect of such a nuanced performance. I may be missing the subtleties, but even for a relatively ignorant listener, Les quatre ronds sont allumés has a carny-backed appeal that’s hard to resist. 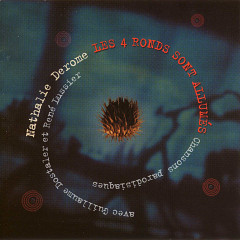