First released on LP in late 1983, Fin du travail (Version 1) documents Montréal guitarist René Lussier’s formative years between the disbanding of the avant-gardist folk-prog outfit Conventum in 1979 and the inception of the record label Ambiances Magnétiques in 1983, something that would generate dozens of releases with Lussier’s name on it for decades to come. Actually, Lussier founded Ambiances Magnétiques with Jean Derome in order to support the release of this album — that’s why it bore the catalog number AM 000, something that stuck when it was reissued on CD in 1996. The seven tracks included on Fin du travail are a chronicle of Lussier’s activities between 1979 and 1983, from the Pouet Pouet Band (“Manifeste”) and André Duchesne’s 1980 project Clockville (“Fête Fatale,” “Clockville”) to the first 1982 Derome-Lussier “Ambiances Magnétiques” concert (“Worksong”). They have been recorded under various conditions and with various musicians but Derome’s presence is the most important. Lussier’s unique sense of humor (well, maybe not so unique since Derome shares it) can already be experienced in the album title: “End of Work (Version 1)” — if it’s finished, why call it “version 1”? — and his carnivalesque references heard in Fête fatale. This aspect of his work, which will develop considerably within his duo Les Granules with Derome, is presented in full contrast with his more serene, soft and textural folk approach inherited from his days with Conventum and the cinematic quality of his writing, the result of numerous soundtracks written for documentaries. The acoustic guitar is more important than the electric and he even plays mandolin on one track. From complex prog rock-derived numbers to avant-folk atmospheres and circus numbers, Fin du travail was the work of a man searching for new means of expression, a quest that would become easier with the creation of Ambiances Magnétiques and his encounter in 1986 with Fred Frith. 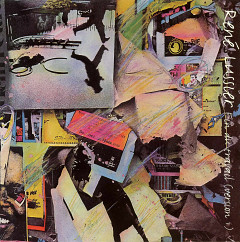