There is nothing mysterious in Mystère, label Ambiances Magnétiques’ four installment in its sampler series. Yes, the track list at the back of the box gives only a list of track numbers with durations — but the card inside contains all the usual information on artists, track titles and albums. Really, nothing to get excited about and no unreleased material. These are sixteen tracks taken from the sixteen albums Ambiances Magnétiques released between 1997 and 1999. If anything, this sampler, compared to volumes 1 (1983-1995) and 2 (1995-1997), shows how much these musicians’ focus has shifted in the mid-1990s from deconstructed pop to free improv. Track selection is inspired. Since there were extensive artist presentations and historical overviews of the label in Ambiances Magnétiques, Volume 1: La Bastringue Migratoire (1996), Mystère is only accompanied by a card with the track list. 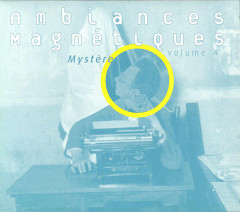