The trio Évidence has been playing the music of Thelonious Monk on an irregular basis since 1985. Live à la Casa is their second release, fifteen years after their debut Évidence: Musique de Thelonious Monk. Évidence’s originality resides in the fact that this is an alto saxophone/electric bass/drums trio — no piano. Live à la Casa has been recorded at La Casa Obscura in Montréal on January 13 and June 17, 1999.

Jean Derome (alto sax), Pierre Cartier (bass) and Pierre Tanguay (drums) take much liberty with Monk’s material — a good thing. They revisit classic tunes (Straight, No Chaser, Reflections) and unearth forgotten gems (the 1947 “Thelonious”). Tanguay plays with Monk’s metric as if he were in the school yard (he’s everywhere but on the beat on Blue Hawk) while Derome relies on split-tones to make up for the missing piano clusters that came to be Monk’s signature sound. The music radiates from the musicians’ pleasure of playing these tunes. Monk fans will be pleased by these fresh interpretations from musicians understanding what the pianist’s music was all about. On the other hand, purists will find much to despise on Live à la Casa, but then again purists usually stay away from Monk. Their loss. 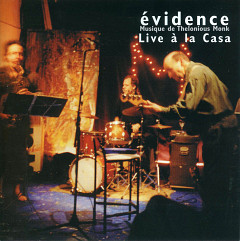 Live à la Casa
Monk fans will be pleased by these fresh interpretations from musicians understanding what the pianist’s music was all about.