All the works on Navré, the second record from this Montréal sextet, were composed by saxophonist Derome during tours with a variety of groups. The influence of the road might show in his predilection for extended structures in which long, slow passages are interrupted by sudden bursts, like the bebop-ish head of Navré or the staccato drumming of “Toronto. “ Or maybe that’s the influence of John Lurie. Like the Lounge Lizards, Derome and his crew are skillful handlers of both atmospherics and dynamics, grounding moody, meandering lead lines in steady, rocking rhythms. They use rough textures—groaning “daxophone” on Anchive, the choked guitar comping on Train pour Nuremberg, the trombone’s growl on Navré—as counterpoints to eloquent melodic elements like the bright flute run on Casse-cou and the rollicking, R&B-flavored baritone sax of Train pour Nuremberg. Guitarist René Lussier, in particular, seems almost more inventive in the background than in the fore. Only Lindau seems derivative, edging towards lite jazz. It’s hard to tell on Navré what’s composition and what’s improvisation. Finer group playing is hard to come by. 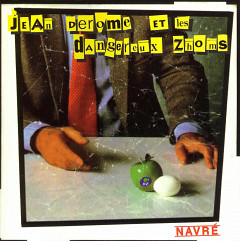 Navré
Like the Lounge Lizards, Derome and his crew are skillful handlers of both atmospheric and dynamics, grounding moody, meandering lead lines in steady, rocking rhythms… Finer group playing is hard to come by.