One of the seven collaborators on this release is M. F. Côté, who is responsible for another release by Ambiances magnétiques. Côté plays drums and live electronics. He is composer and improviser. All these qualities can be enjoyed on this solo-album “Compil Zouave”. Côté composed for dance, theatre and film. He is known for his work in the Bruire ensemble. He is also a first-generation member of the Ambiances magnétiques collective. His compositions on this solo-effort are played by an ensemble of 20 musicians, Pierre Bastien and Martrin Tétreault among others. It is difficult to find out what kind of game Côté is playing here. Very humorous music, no boring persiflage’s. Here is played with much musical wit with the music of Miles Davis, Chet Baker, reggae, eastern music, etc. Fake jazz, semi-jazz Call it how you like. Deconstruction may be a good name for the way Côté uses the music of Baker and others. Inventive and original where you wonder it comes from. It gives a new and very interesting light as to how reinterpret already existing music. 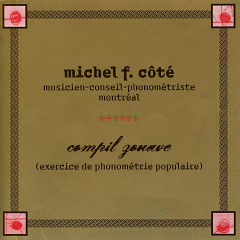 Compil zouave
It gives a new and very interesting light as to how reinterpret already existing music. […] Very humorous music, no boring persiflage’s.