Given Derome’s legacy and standing in the field on the Canadian creative music scene Souffles feels like a culmination of a lifetime crafting forward-thinking music and, at the same time, a misfire. At times music can be dynamic. Its motifs and refrains show a style of playing that has seen Derome receive plaudits from critics, his peers and live audiences alike. Yet, there are portions of the album when it doesn’t really work. Cloudy sees Derome playing a wind instrument. Is it a penny whistle? A Piccolo? A child’s recorder? Ultimately it doesn’t matter. Its sound is in the middle of a Venn diagram featuring virtuoso reedist playing an unfamiliar instrument, toddler music group, nails down a blackboard and asthma attack. The phrases are played almost ad nauseum for its nearly five-minute duration. With each one, the tension gets more and more unbearable. When Cloudy does end you let out a pleasing sigh of relief. Which is a shame when compared to Eskers-Zoo. Here Derome delivers riff after glorious riff. The music soars. It dances all around you. It makes you feel alive and excited for the next barrage. He attacks his instrument. Playing it for all its worth, then gently caresses it and plays tenderly. It’s nothing short of wonderful. And makes the tracks like Cloudy even more infuriating. Derome is clearly a gifted player. He has an exceptional ear for melody and contrasting tones, which makes the damp squib of Cloudy, Castelet and Cantus Firmus so dejecting.

If you are an existing fan of Derome’s work give his a-go, as you might find something I didn’t. If you don’t know Derome’s work, maybe try something else as this might be too overpowering on a first try. What is clear is that after all these years Derome isn’t running out of ideas, but much like the edible namesakes the album is named after, they need to cook to perfection. Many some of these tracks needed to come out of the cover a little soon and others needed a little more time before they were ready for public consumption. 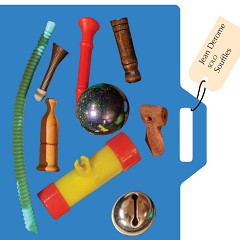 Souffles
Its motifs and refrains show a style of playing that has seen Derome receive plaudits from critics, his peers and live audiences alike.