There is something delicate about Marilyn Lerner and Nicole Rampersaud’s playing on Brass Knuckle Sandwich that you miss the first couple of time you play it. At first, it all sounds like broad brushstrokes of sound. That susurration for example. It is all long, shrill, trumpet blasts from Rampersaud and harrowing piano tinkering from Lerner, but after you become a tune to it, you start to realise that there is a fragility to the playing. Lerner isn’t so much filling in the spaces left by Rampersaud, but she is adding patches of light to encounter the raspy blasts. It works fantastically well. We are giving a vibrant performance and an indication of what to expect on the rest of the album.

Evermore is probably the most conventional track. Lerner’s piano is elegant and wouldn’t be out of place being played at a dinner party. The work runs are measured but with a slightly ominous edge. When Rampersaud comes in, around the halfway mark, her playing is more conventional and restrained. It reminds me of the work of Marc Chagall. The paintings are lifelike but there is a level of abstraction to them that takes you by surprise. The same is true here. Lerner is playing some really beautiful motifs. It pulls at the heart, then Rampersaud comes in and, BAM, everything has a slightly off-kilter vibe to it. It’s the strongest track on the album.

At first, I thought that Brass Knuckle Sandwich was an odd title, but after listening to it a few times it makes perfect sense. The knockout punch happened during Rizoo. The final track, Rizoo, is also the one that everything hangs on. The previous six have set out the aims and points for the performances. They have shown Lerner and Rampersaud’s regard, and disregard, for a convention. There have been eloquent melodies and bestially thrashings, but here it all comes together. To being with Lerner is taking the more collected route again. Her controlled work is delightful, with a playfulness that was missing on some of the earlier tracks. As with Evermore it allows you to get comfortable with the piece. Rampersaud is again shrill, then around the halfway mark, the roles switch. Lerner starts to play more abstractly with Rampersaud playing in a more conventional manner. The change happens so slowly you almost miss it until it’s too late. What Rizoo does it break our mindset of the previous six tracks. It changes our perceptions with not only what Lerner and Rampersaud are capable of, but what the album is about.

At its heart, this is an album that likes to play with our ideas of form and composition. It leads us one way then bops us over the head and runs off giggling, like a character in a child’s comic. There is no malice intended, just a thrill of doing it. But what did we expect from two of Canada’s greatest improvisers? This is an album that works as a conversation between gifted, and patient, musicians. They are both taking the time to get their points across, while listening, and considering the others. If only all music was this audacious. 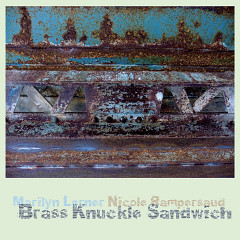 Brass Knuckle Sandwich
If only all music was this audacious.