The other part of Ambiances Magnétiques institutionalization came in the form of a sort of repertory group led by violist Jean René, who released the remarkable solo recording, Fammi (&records) in 2010. With violinist Joshua Zubot, fantastic drummer Pierre Tanguay and bassist Nicolas Caloia, René struck a Stéphane Grappelli bop that could melt and reform in quick minutes and turn to upbeat Québécois folk the next. The set list was comprised of an Ambiances Magnétiques songbook, with old and new pieces by Derome, Normand Guilbeault and René Lussier, as well as some of René’s own pieces. The quartet was lively and precise, and, along with Ensemble Supermusique, showed once again what a unique group of composers and interpreters there are under the Ambiances Magnétiques banner. (…)

The quartet was lively and precise, and showed once again what a unique group of composers and interpreters there are under the Ambiances Magnétiques banner.

From a different perspective, the next set also faetured three strings but was completely different. The last set of Day 2 featured a quartet led by Jean René on viola with Joshua Zubot on violin, Nicolas Caloia on acoustic bass and Pierre Tanguay on drums. The sound of this ensemble was like a twisted string quartet with the drums as an equal part. Whereas Zorn’s string players were articulate and tight, this quartet had a looser earthiness, which was wild and chaotic at times. The quartet blended partially written material with frenzied sections and sparse moments as well. Mr. René’s writing seemed to draw from folk/rock as well as the odd classical influence. Sometimes all three strings buzzed together intensely while longtime AM drummer Pierre Tanguay balanced both rhythmic and subtle melodic counterpoint. What was surprising about this set was that you never knew what direction was coming next. Both Josh Zubot on violin and Jean René on viola took a number of inspired solos while the group interplay that was filled with many odd twists and turns. This was music that will take some time to get used to so it is probably a good idea to get Mr. René’s disc on AM (sic!) and dig in deeper.

What was surprising about this set was that you never knew what direction was coming next. 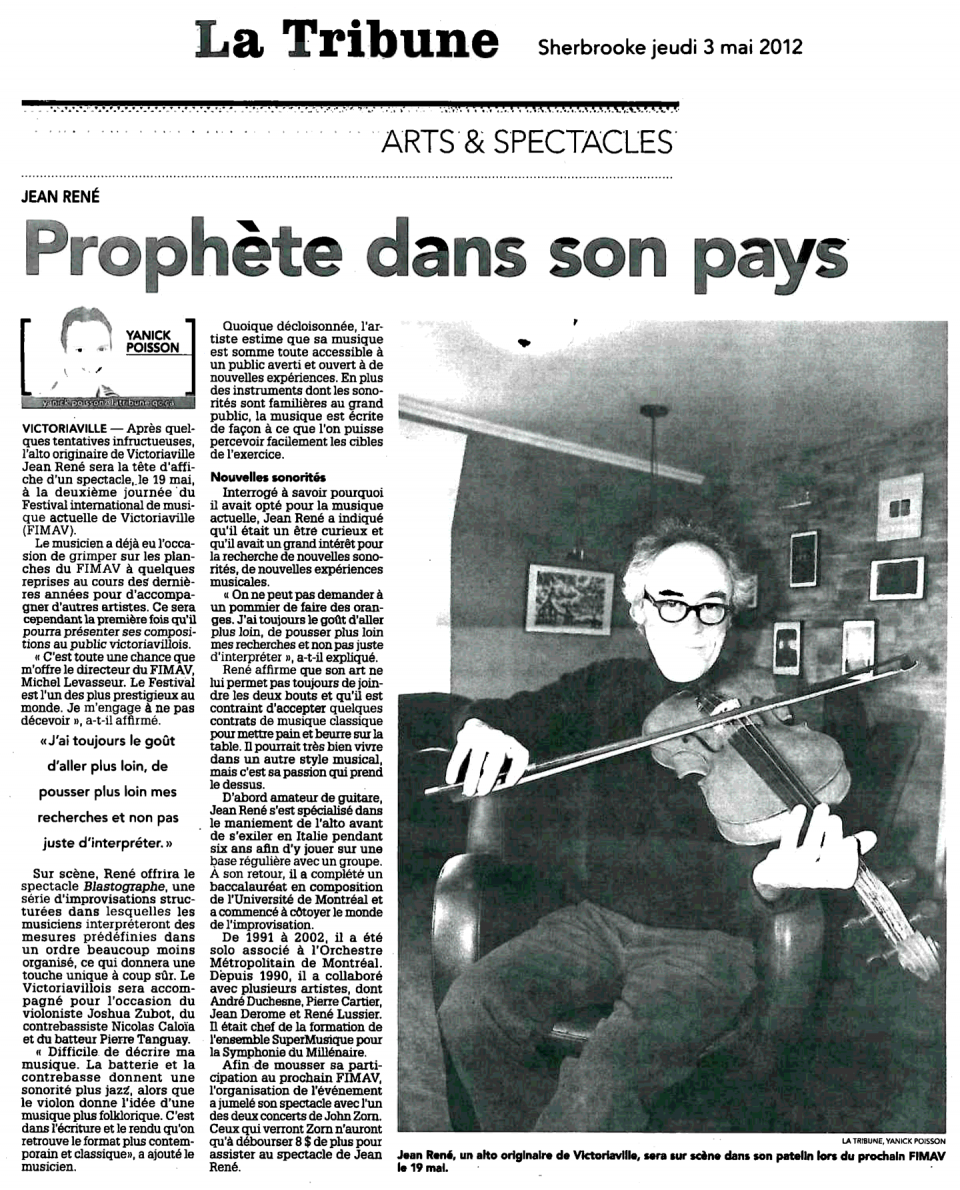 Montréal’s creative music scene is not exactly a hotbed for violists, or anywhere else for that matter. Fortunately, we have Jean René as the local representative of this underrepresented string instrument. Jean René is best known for his contributions to projects led by René Lussier, Michel F Côté and Jean Derome. René performed for the second consecutive Off fest with his quartet Et Quart, featuring Joshua Zubot (violin), Nicolas Caloia (bass) and Pierre Tanguay (drums) at the Casa del Popolo. The quartet performed a mix of René’s own compositions, several from his latest solo viola release Fammi (&records) as well as others’. The quartet performance was easily as quirky as the studio solo album. Note that unlike the studio solo recording, René did not appear to make use of any electronic manipulations to his viola in live performance. The ensemble sounded very well integrated and thoroughly absorbed in René’s sound world. Very pleasing to the ear was the relationship of Zubot’s crystalline tone versus René’s very wooly viola tone, all against a backdrop of Caloia and Tanguay’s foundation. The performance was mainly about the compositions, but left room for the musicians to improvise, and in Zubot’s case, replete with a tremendous display of virtuosity. This is a group that needs to be recorded.

This is a group that needs to be recorded.