Her musical career is only one of many facets she has integrated to her art.

Genevieve Letarte is a singer that is a poet and novelist as well. Her developed ability to communicate and express emotions comes across on this warm and personal disc. Sparse, almost Western, accompaniment by electric guitar and drums joins Letarte in delivering her original songs that strike the listener as familiar and nostalgic.

… warm and personal… strike the listener as familiar and nostalgic.

What? You weren’t out looking for an eclectic album by a 45-year-old French-Canadian multidisciplinary artist? Geneviève Letarte appears before us anyway with this beautiful, surprising disc. A poet, spoken word performer and author of three novels, Letarte sings with an offhanded grace, and her songs sound like lyrical conversations with a close friend — one you might not be able to follow, if you’re not a French speaker, but Letarte’s entrancing voice and the easygoing warmth of the songs make that seem like a negligible problem. Chansons d’un jour (“Songs of One Day”) mixes smoky jazz and mid-tempo rock with Old World folk music and light touches supplied by accordian and dobro. The crisply produced album includes some unusual arrangements, such as the double-tracked vocals that provide counterpoint rather than harmony, and songs that are well worth hearing whether you understand them or not. The music here succeeds in transcending the boundaries of language.

Genevieve Letarte appears before us anyway with this beautiful, surprising disc. 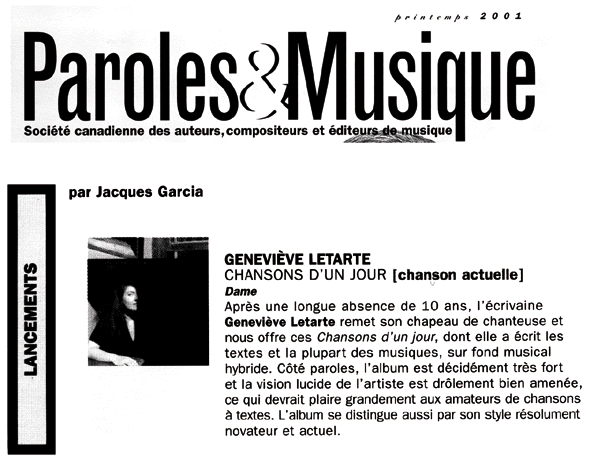