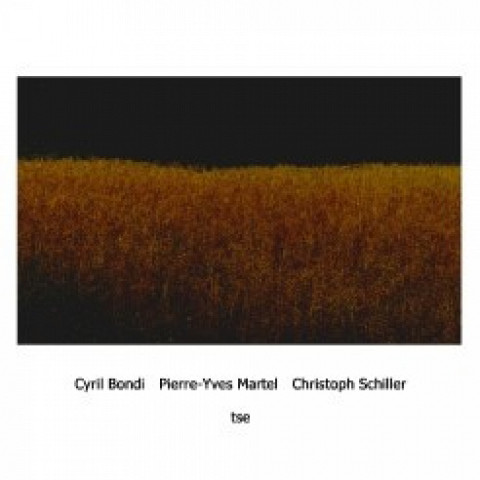 The intense focus on dynamics, […] at times results in pieces so spare and quiet that the trio seems to be polishing silence into sound, sound into silence. — Musicworks, Canada

… the fascination in tse’s presence is how these sounds, designed with understated, overlapping restrictions, continue to hold aural interest during the evolution of each track. — The WholeNote, Canada 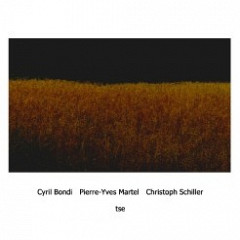 The intense focus on dynamics, […] at times results in pieces so spare and quiet that the trio seems to be polishing silence into sound, sound into silence. 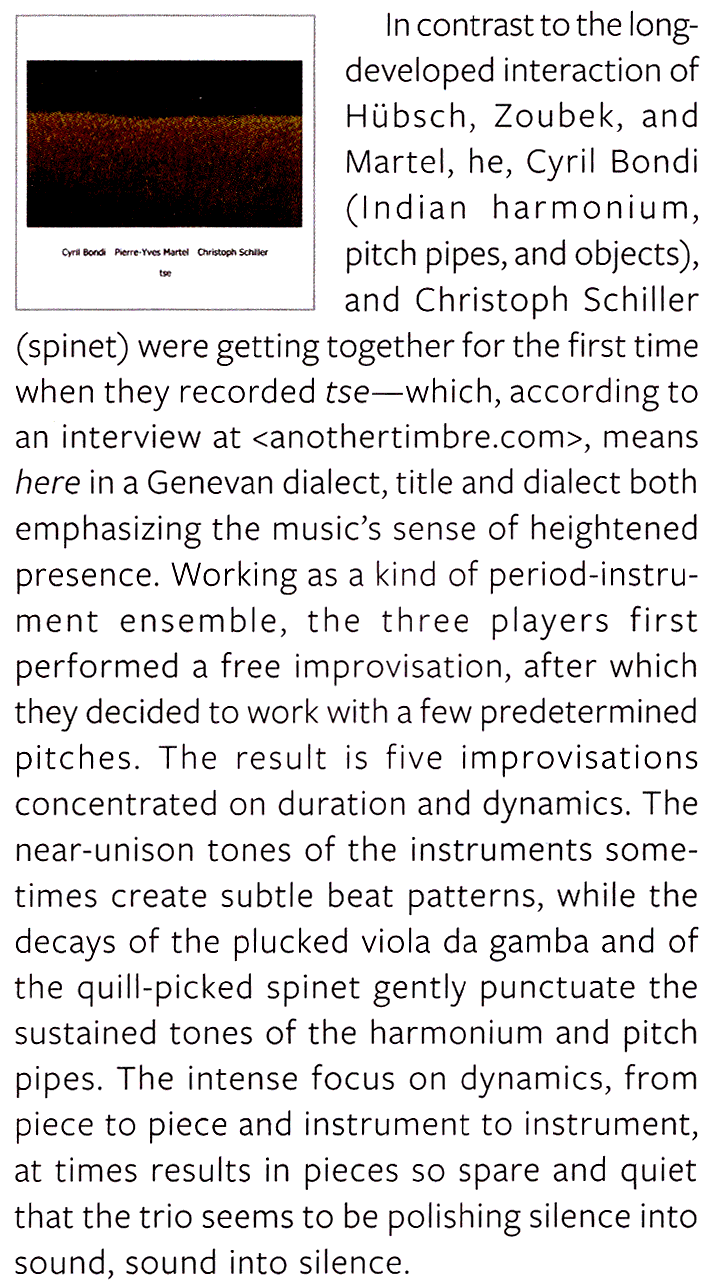 … the fascination in tse’s presence is how these sounds, designed with understated, overlapping restrictions, continue to hold aural interest during the evolution of each track.

This album places Bondi in a more intimate context with the Quebecois Pierre-Yves Martel and the German Christoph Schiller. The instrumentation on this album is notable in its own right. All three musicians play early musical instruments: Bondi the harmonium and pitch pipes, Martel the viola da gamba and pitch pipes, and Schiller the spinet. Most of the tracks on this disc are based around a framework of pre-selected pitches. Others are freely improvised, though it is difficult to distinguish which these were. The result is a series of intricately textured and meditative tracks. In ways, this ensemble resembles a stripped-down IMO.

As Martel notes in an illuminative interview posted on the Another Timbre website, the title, Tse, is a Genevan word that simply means “here.” He then explains that this may reflect the suddenness and happenstance of the meeting of these three musicians. However, there seems to be more to it than that. The tracks almost bleed into each other. Each has its nuances and unique beauty, but one must listen closely to find this repressed dynamism. “Here” may also reflect the nuances of place and music. The pieces resemble each other in their slow, subtle, droning beauty. They also, however, represent discrete moments of musical inspiration and creation. In that sense, they reflect the singularity of being present in any moment, setting, or piece. The effect is entrancing and, at times, disconcerting. Tse actually offers six “heres,” and shows that even the superficially mundane or old can be pregnant with new and provocative possibilities.

The pieces resemble each other in their slow, subtle, droning beauty. They also, however, represent discrete moments of musical inspiration and creation.

tse is a suite of five modern compositions that move between doomed simmering’s, angular sourness, and wavering dread. The release comes in the form of a CD on Sheffield’s Another Timbre, and as we’ve come to expect from the label this is another of shot well conceived & perfectly recorded experimental sound craft.

The five-piece work here is improvised, yet it revolves around a series of pre-agreed pitches. So, as a result, you get a suite that has continuity & recurring sour melodies, as well as feeling of foreboding loose-ness, and bitter surprise. The piece was recorded in November 2017, at the insub.studio in Geneva.

The three-piece collective is made up of Cyril Bondi — Indian Harmonium, pitch pipes, and objects. Pierre-Yves Martel — Viola Da Gamba, pitch pipes, & harmonica. And Christoph Schiller — Spinet. The blend of droning & sawing instrumentation give the trio a very much of a doomed & slurred sound, and they use this to good effect on tse.

The five-piece suite comes in at a total of forty-six minutes — with each part of the suite hitting between seven & ten-minute mark. The suite opens in a fairly coarse/nervy manner with a spaced-out mixture of brooding string simmers, sudden higher pitched string twangs, and slurred pipes. As we move through the suites runtime the pace is kept fairly considered & slowed — as angular droning meets with a blend of higher-to-sour string pluck, and bleak stretched out simmer. From time to time pulled-out & slurred melodies appear, but ultimately these seem secondary, and the main focus here is to create a doomed atmosphere & malevolent haze of sound

The work does very much feel like a suite, due to both the focused selection of pitches, and the occasion recurring patterns. And on the downside this does, at times, create a feeling of little progression/ movement — but if you’re interested slowed, slurred, off-kilter & decidedly soured modern composition I think you’ll get something out of tse. I took this release away with me on a recent Greek holiday, and it both nicely lulled me out and created an effective bleak contrast to all the sun & fun going on around me.

The work does very much feel like a suite, due to both the focused selection of pitches, and the occasion recurring patterns.

It’s probably fair to say that we all have our instrumental prejudices, silly as those undoubtably are. I know people who don’t like flutes or violins, baffling as those attitudes are to me. But I have to admit that it takes extra concentration on my part to get past the essential sound of a harpsichord. I do think that this is more an issue on recordings than live as just last year I attended a home concert by the very excellent local harpsichordist Andrew Appel and enjoyed it without reservation. Maybe it has something to do with childhood encounters with the keyboard in schmaltzy horror movies or as backdrop to any number of faux esthete contexts. But that jangly sound, the lack of sustain….something makes it tough for me.

The spinet is essentially a small harpsichord and Christoph Schiller, to the best of my knowledge, pretty much confines his playing to to it. Here, he’s joined by Cyril Bondi (Indian harmonium, pitch pipe, objects) and Pierre-Yves Martel (viola da gamba, pitch pipes, harmonica) on five improvised tracks (I — V). On the first, the trio circumvents any foolish objections on my part as Bondi and Martel lay down long, smooth lines onto which Schiller sprinkles slivers of spinet, glinting amongst the hums. Those drones are beautifully constructed themselves, a lovely combination of timbres, and the spinet adds a wonderful texture. By the way, I’m guessing that Schiller applies some extended techniques now and then (perhaps bowing the spinet’s interior or otherwise directly manipulating the strings?), though I’m not at all sure. II is similar, though generally pitched higher and with somme separation between phrases. There’s a stretched feeling, a bit more astringency that’s piquant, a nice shift from the prior track. In fact, the variation is subtle on each of the five pieces. Given the drone0like nature of the harmoniums, harmonicas and pitch pipes and virtually the opposite aspect of the spinet, that’s not so surprising; only the viola da gamba might go “both ways”, though Martel seems to switch between arco and pizzicato now and then. Another predilection of mine is, with regard to anything more or less in a drone style, toward the low and grainy, so I found IV especially appealing, a really delicious, calm sequence of lines, rich and complex, with deep tones from (I think) the pitch pipe. V offers slightly more aggression from the spinet, at higher pitch levels and with somewhat sourer harmonies and, again, heard in the context of this “suite”, works perfectly well. In fact, listening to tse as a suite, and a very ably constructed one, seems to be the way to go, at least for me. Spinets be damned, it’s an engaging and discreetly demanding listen; good work.

In fact, listening to tse as a suite, and a very ably constructed one, seems to be the way to go, at least for me. Spinets be damned, it’s an engaging and discreetly demanding listen; good work.