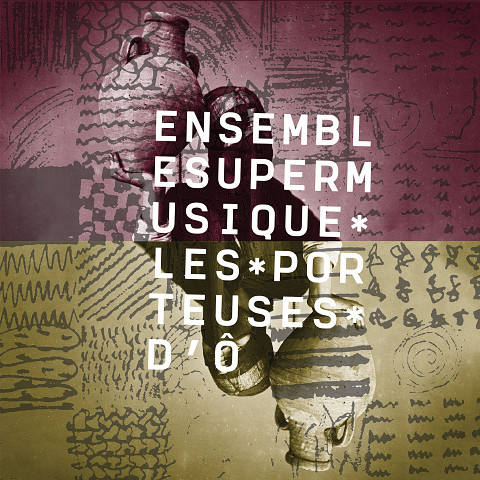 Together, these three very different compositions show radically contrasting facets of ESM and demonstrate that it is in excellent shape as it enters its third decade. — The Squid’s Ear, ÉU

What makes Ensemble SuperMusique special is that each of their dozen discs finds a way of harnessing the many different ways that composers and players utilize the balance between written and unwritten extremes. — Downtown Music Gallery, ÉU 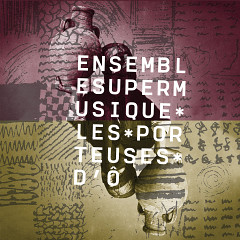 Fittingly, Les porteuses d’Ô was released in January 2018, the year marking the twentieth anniversary of the formation of Montréal’s Ensemble SuperMusique (ESM). In the years of its existence, the ensemble has explored ways of integrating improvisation with composed music, commissioning over fifty compositions that combine the two. So, it is no surprise that this landmark album features three new graphically-scored compositions which aim to do just that. The line-up of ESM has evolved throughout its lifetime, with few ever-present members; of the twenty-six players credited on ESM’s debut album, Canevas (Ambiances Magnétiques, 2004), only four feature among the thirteen on Les porteuses d’Ô — alto saxophonist and flautist Jean Derome, alto saxophonist and vocalist Joane Hétu, alto Jean René and percussionist Danielle Palardy Roger. ESM co-founders Hétu and Palardy Roger supplied two of the album’s compositions, the third coming from Vancouver-based Lisa Cay Miller; yes, all three pieces do have female composers.

Recorded live in concert, in Montréal, in April 2017, together the pieces run for just over forty minutes, the three being of similar lengths. The album opens with Palardy Roger’s 2014-15 piece En arrivant par le nuage de Oort, the title referring to the theoretical Oort cloud of icy objects, the origin of long-period comets such as Hale-Bopp. Palardy Roger says that “the unfolding of the composition evokes the journey one might undertake between the Oort cloud and the Sun.” Of course, the danger of such a statement is that the composition in question is listened to as programme music, with the listener literally interpreting each sound. To combat that, it would be useful to see the graphic scores themselves, but this CD does not include any of them, only their composers’ notes on them. Suffice to say that the music feels true to its composer’s intention; its soundscape begins with lots of small percussive sounds surrounded by space, and gradually becomes fuller, louder and more intense as it builds steadily to a climax.

By comparison, the next piece, from 2015-17, Hétu’s Préoccupant, c’est préoccupant, is far more garrulous and dramatic. Fittingly, the fifteen-minute track opens with a theatrical drum roll which leads into a prolonged passage of discordant sounds from the nine musicians involved, heralding the arrival of the composer’s own voice. From there on, the piece is episodic with that voice dominating. As the composition focuses on four “concerns that can insidiously interfere in our lives”, starting with “To Fall from High”, there is plenty of scope for expressive outpourings of emotion and angst, including weeping and wailing. The calmer instrumental passages provide welcome periods of respite.

The album closes with Miller’s 2017 composition Water Carrier which (in translation) is practically the title piece. Inspired by the issue of drinking water rights of First Nation communities in Canada, it is wholly instrumental, successfully integrating composed and improvised music. It features some poignantly melodic passages played by the ensemble’s strings. These are interspersed with some strongly rhythmic sections and others with a clear jazz influence.

Together, these three very different compositions show radically contrasting facets of ESM and demonstrate that it is in excellent shape as it enters its third decade.

Together, these three very different compositions show radically contrasting facets of ESM and demonstrate that it is in excellent shape as it enters its third decade.

What makes Ensemble SuperMusique special is that each of their dozen discs finds a way of harnessing the many different ways that composers and players utilize the balance between written and unwritten extremes. 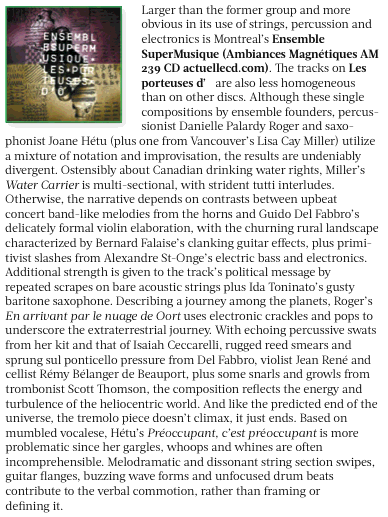 Larger than the former group and more obvious in its use of strings, percussion and electronics is Montréal’s Ensemble SuperMusique (Ambiances Magnétiques AM 239 CD actuellecd.com). The tracks on Les porteuses d’Ȏ are also less homogeneous than on other discs. Although these single compositions by ensemble founders, percussionist Danielle Palardy Roger and saxophonist Joane Hétu (plus one from Vancouver’s Lisa Cay Miller) utilize a mixture of notation and improvisation, the results are undeniably divergent. Ostensibly about Canadian drinking water rights, Miller’s Water Carrier is multisectional, with strident tutti interludes. Otherwise, the narrative depends on contrasts between upbeat concert band-like melodies from the horns and Guido Del Fabbro’s delicately formal violin elaboration, with the churning rural landscape characterized by Bernard Falaise’s clanking guitar effects, plus primitivist slashes from Alexandre St-Onge’s electric bass and electronics. Additional strength is given to the track’s political message by repeated scrapes on bare acoustic strings plus Ida Toninato’s gusty baritone saxophone. Describing a journey among the planets, Roger’s En arrivant par le nuage de Oort uses electronic crackles and pops to underscore the extraterrestrial journey. With echoing percussive swats from her kit and that of Isaiah Ceccarelli, rugged reed smears and sprung sul ponticello pressure from Del Fabbro, violist Jean René and cellist Rémy Bélanger de Beauport, plus some snarls and growls from trombonist Scott Thomson, the composition reflects the energy and turbulence of the heliocentric world. And like the predicted end of the universe, the tremolo piece doesn’t climax, it just ends. Based on mumbled vocalese, Hétu’s Préoccupant, c’est préoccupant is more problematic since her gargles, whoops and whines are often incomprehensible. Melodramatic and dissonant string section swipes, guitar flanges, buzzing wave forms and unfocused drum beats contribute to the verbal commotion, rather than framing or defining it.

Additional strength is given to the track’s political message by repeated scrapes on bare acoustic strings plus Ida Toninato’s gusty baritone saxophone.

Roger’s En arrivant par le nuage de Oort (2014—15) is a graphic score that resembles conventional notation, creating an ambiguous ground for the members of the ensemble. The work describes a cosmic journey from the Oort Cloud — the ring of comets orbiting the sun at the outer edges of the solar system — to the sun itself. It’s a journey from darkness to absolute light, marked by rising pitch and volume, accelerating events, and an expansion of orchestral colour that grows in intensity throughout its thirteen-minute duration. It’s a singular, initially gradual movement, but the passage through space is marked by sudden flashes of brilliance.

Hétu’s Préoccupant, c’est préoccupant (2015—17) the CD’s centrepiece, is inspired by “various concerns that can insidiously interfere in our lives.” There are four concerns here, two with multiple forms: falling from high (including effervescence and fainting), states (coup d’états and states of mind), bitter oranges (an inspired list of expired foods, among them putrid steak and rancid nuts: the items are called out throughout the work’s duration), and the “tone of your voice.” The musicians follow a sequence of words, drawings and colours, and the piece teems with high spirits, good humour and explosive invention, highlighted by a duet between Hétu (voice) and Jean Derome (alto saxophone).

B.C. composer Lisa Cay Miller’s Water Carrier (2017), is inspired by issues of water rights in Canada and uses mixed materials, including graphic scoring (a checkerboard), standard rhythmic notation, and free improvisation. No detailed programmatic concordance to the work is supplied, but it abounds in unusual textures, including a full-ensemble passage in which Ensemble SuperMusique’s horns and rhythm section sound like a traditional jazz big band, while the strings play contrasting parts from the vocabulary of European high modernism. Other unlikely textures include the opening passage in which grinding, discordant, bowed strings give way to episodic, liquid intrusions from Bernard Falaise’s guitar amid consonant pizzicato passages.