The activities of Lepage and Lussier — quirkily proficient in clarinet and guitar respectively — are exquisitely complemented by Bozzini’s strings… — Touching Extremes, Italie

We’re here reporting about the most recent effort by a pair of pillars of Québec’s scene, of whom this reviewer bought the vinyl version of their first collaboration — Chants Et Danses Du Monde Inanimé — shortly after it came out in 1984 (gasp). We never looked back, in case you’re asking.

Conventum, ever heard of them? Le Trésor De La Langue, anyone? Does the title La Traversée De La Mémoire Morte ring any bell? There is time to do some homework, no problem. But please do it if you’re not acquainted with these perennially acute artists yet.

The activities of Lepage and Lussier — quirkily proficient in clarinet and guitar respectively — are exquisitely complemented by Bozzini’s strings across a cycle of pieces long enough to give the idea of a fully formed concept and short enough to make sure that, once the picture has been drawn, there is no need to dwell on it more than necessary.

It’s a clever choice, because this is unpredictable music who literally defies categories. Furiously arrhythmic and incredibly poised; strengthened by commitment and ironically derisive; replete with melodic sketches which, in a matter of seconds, melt individual meanings in a contrapuntal cauldron of distortion, dissonance and — for lack of a better description — unobtrusive clangor.

Sometimes the mind’s gates get opened to sudden contemplative flashes. Those don’t last too much, either. Basically it’s all a “catch-a-glimpse” game: one may succeed or simply not realize what’s going on. When the ears manage to convey a precisely articulated message to the brain, chances are that Lussier, Lepage and the good people at Bozzini’s will find a way to disrupt whatever was learnt a moment before.

And they always do that armed with a wry smile emerging from nowhere, perhaps in the middle of a semi-organized chunk that doesn’t fit in any mental archive.

In another age, we could have stamped this album with a “sonic art for the modern times” definition. However, faint lights of yesteryear occasionally guided us along a path that exploits the memory as a catalyzer of transmissions related to some kind of “future”. A place where language is truly just the virus hypothesized by Bill Burroughs, exclusively curable through the use of instantaneous decisions dictated by instrumental adroitness.

Let’s sing and dance ourselves, then — and raise our aerials up. Maybe we’re set to untie the knots of incommunicability, and we don’t even know it.

The activities of Lepage and Lussier — quirkily proficient in clarinet and guitar respectively — are exquisitely complemented by Bozzini’s strings…
The sonic narrative on track ten […] sums up the duo’s interaction most succulently, politically and meaningfully. 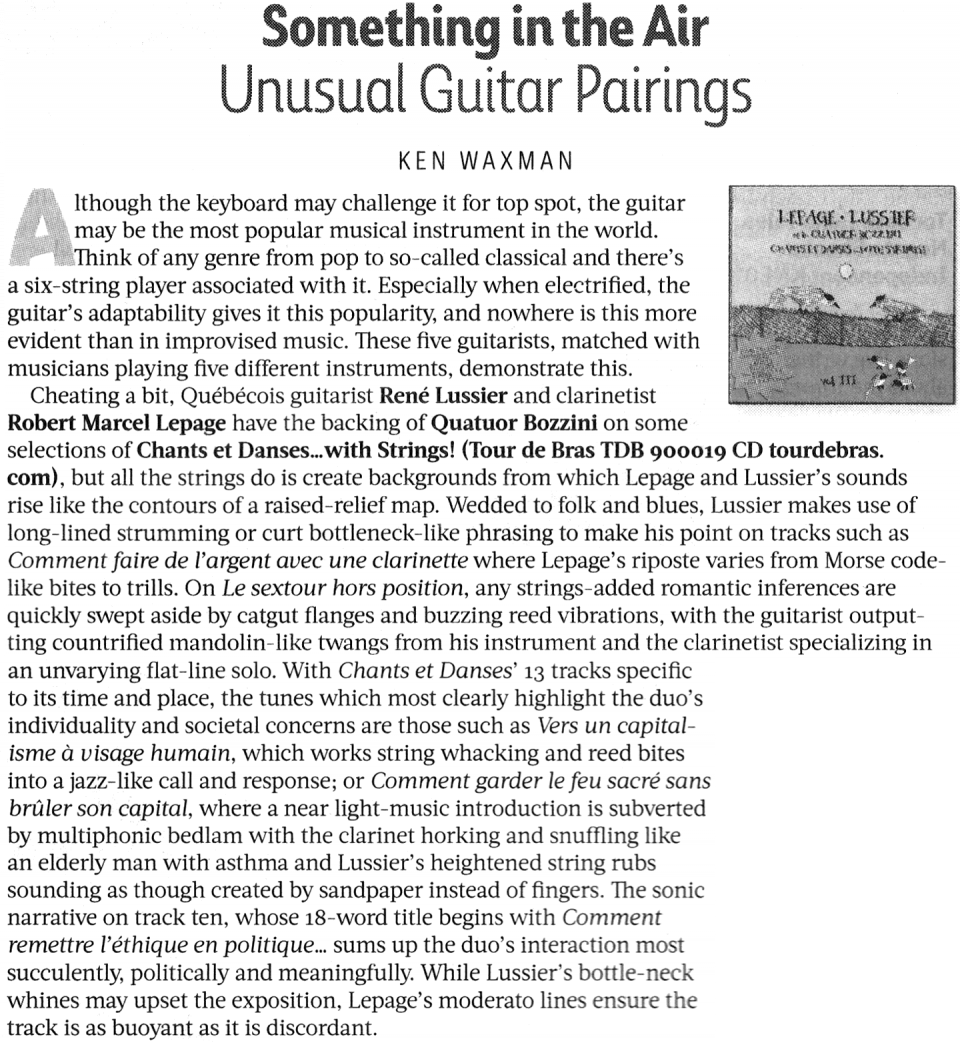 Chants et danses… with Strings! (Vol. III) is a rather mind-blowing album by Robert Marcel Lepage, René Lussier, and the Bozzini Quartet. This album is a masterpiece of experimental music, joining together chamber music, noise music, and improvisation. The guitarist and clarinetist are joined here by an experimental and classical string quartet, which serves as support and filler more than anything else. Their role isn’t prominent but certainly gives more body to the record. It’s a really unique album I’d recommend to anyone!