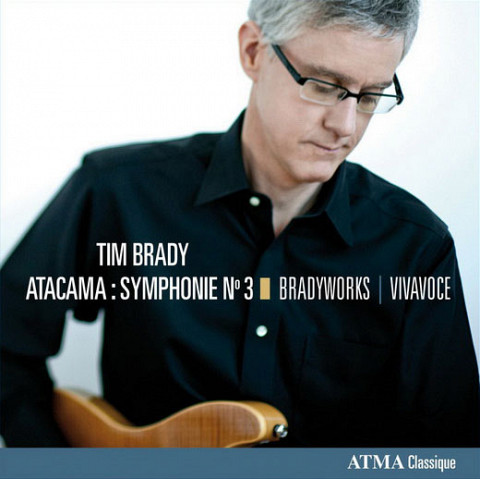 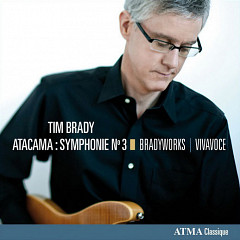 […] Canadian guitarist and composer, Tim Brady, has played at Victo several times and always does something different. For this concert, Mr Brady unveiled his Symphony #3 — Atacama, a serious, engaging effort that he had been working on for a while and had only been performed once. Mr. Brady had a double ensemble featuring his own 11-piece unit Bradyworks plus Vivavoce, a 21-person vocal ensemble. The long work was inspired by the words of Chilean poet Elias Letelier’s book named Symphony. The songs were sung in Spanish which was the original language and printed in the leaflet which was given at the concert and printed in English, French and Spanish. It was helpful to read the words in English since they were integral to overall nature of what the piece was about (Pinochet’s regime of terror). Atacama consists of three sections, the first featured the chorus by itself. Since I haven’t really listened to much classical choral music, I can’t compare it anyone else, but it often did remind me of songs performed in a church. The large chorus did a momentous job of performing the rich, complex, multi-layered music which occasionally reminded me of Magma’s distinctive operatic sound. The second section, featured Bradyworks which included the ever-spirited Lori Freedman on clarinets in its ranks. The music was often complex and thought-provoking and recalled some of Frank Zappa’s more memorable classical music. Mr. Brady, who is a fine, diverse and creative guitarist, didn’t enter until the second half of the second piece and finally cut loose taking a strong solo before the second section came to an end. The third section featured Bradyworks and the chorus together and was an even more striking blend of two different worlds. Atacama was some 55 minutes long and well worth listening to in the future since it will take a while to fully absorb its impressive and challenging nature. I will be ordering copies of the CD sometime soon and urge you to give it a listen. This work was presented in Colosseum A which is pretty large and no doubt difficult to make sound just right. The sound people and overall presentation were consistently splendid throughout the entirety of this festival. […]