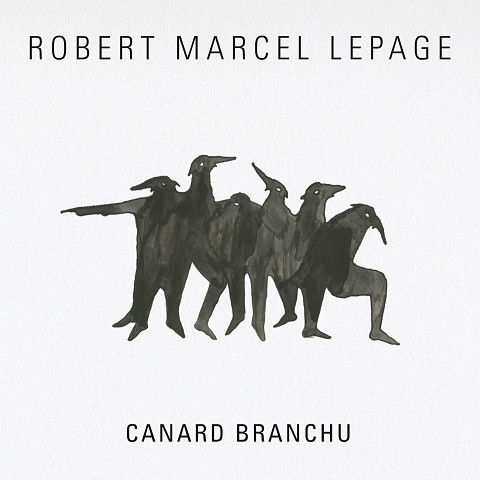 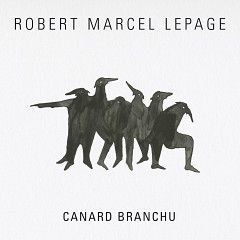 This disc features six clarinetists: Jean-Sébastien Leblanc, Pierre-Emmanuel Poizat, André Moisan, Guillaume Bourque, Lori Freedman & Robert Marcel Lepage on assorted clarinets plus Nicolas Borycki on organ (3 tracks), Fraser Hollins on contrabass and Pierre Tanguay on drums. Mr. Lepage is a clarinet player with more than a dozen discs out on the Ambiances Magnétiques label, each one with a different theme or strategy. There appears to a theme for this disc but since I still can’t read French, I can’t tell you what that theme is. As a big fan of the clarinet myself, I really dig what few clarinet ensembles I’ve been able to check out. This one is equally formidable thanks to the strong writing of Lepage and the spirited playing of the clarinets and rhythm section. Lepage composes quirky, playful melodies which seem deceptively simple yet there is more going on than what we hear on the surface. Some pieces are just the clarinets with weaving their elegant lines. I dig the way Mr. Borycki’s sly yet cheesy organ adds a certain lounge-like charm to Rainettes à la brunante. The ever-inspired Lori Freedman takes a couple of fine bass clarinet solos here, which is yet another reason to savor this gem. What I like most about this disc is that none of it is very avant or overly adventurous. The music stands on its own quietly inventive and thoughtfully played enchantments.

The music stands on its own quietly inventive and thoughtfully played enchantments.

Reed sections have been part of jazz’s performing vernacular since its earliest days. But only with the freedom that arose with modern improvised music in the 1960s were the woodwinds able to stand on their own. In the right hands, with the right ideas, a group consisting only of saxophones and/or clarinets can produce satisfying sounds that don’t need the intervention of a rhythm section or even brass for additional colors. All of the fine discs here demonstrate that. (…)

The difference may result from geography or personality, but in sharp contrast to the concentration on solemn experimentation which characterize the Double Trio and Keefe Jackson CDs, Montreal clarinetist Robert Marcel Lepage’s Canard branchu in the main promotes unselfconscious merriment. With his reputation for creating soundtracks, Lepage sets his compositions here in a fanciful swamp populated by the insects, birds and amphibians. Moreover while many tracks on the other CDs appear to be evolving improvisations, Lepage’s are self-contained, songs. Nonetheless while the sounds may be decorous and controlled, they’re not formal and mix good fun alongside technically clever improvisations. The band make up is different as well. The core band is Jean-Sébastien Leblanc and Pierre Emmanuel Poizat on clarinets, Guillaume Bourque, bass clarinet, André Moisan on basset-horn plus bassist Fraser Hollins, and drummer Pierre Tanguay, with Nicolas Borycki adding electric organ on three tracks. Bass clarinetist Lori Freedman joins the band on one track and plays another unaccompanied; while the composer plays solo and duets with Moisan on two different cuts. With steady rhythm section work, the others are freed for supple, contrapuntal work, resembling the score for a kids’ show on one hand and Duke Ellington’s arrangements for clarinet trio on the other. Characteristic is Le Pelleteur de nuages, whose church-like harmonies courtesy of Borycki underlie a theme that touches on Can’t Help Falling in Love plus Creole Love Call. Bourque shines on Maringouins en escadron as tremolo horn parts sound as if they come from an accordion; whereas Fondation: qui sommes-nous is a pseudo-tango that contrasts the basset horn’s serene chalumeau with slick drum patterns. Chalumeau is also in use on Mi-figue, mi-bémol, Lepage’s solo feature, that improvises succinctly on the melody line, whereas on her own feature, Freedman’s variants on Le Grand héron et la demoiselle use hectoring cries, irregular vibrations, split tones and spetrofluctuation to deconstruct the theme into individual atoms, then reconstructs in a pointillist fashion. (…)

In trio or larger formations, each of these CDs confirms the long-term viability of woodwind groups creating exhilarating sounds.

In trio or larger formations, each of these CDs confirms the long-term viability of woodwind groups creating exhilarating sounds.