Both the OIO and AIMTO attempt particular sound variations to re-define — or perhaps it’s to define — the parameters of large improvising ensembles. — Jazz Word, Canada

The Association of Improvising Musicians Toronto (AIMToronto) Orchestra was formed in 2007 to rehearse and perform the music of Anthony Braxton. Their performance at the Guelph Jazz Festival, with Braxton playing and conducting, was broadcast by the Canadian Broadcasting Corporation and is documented as Creative Orchestra (Guelph) 2007 (Spool Records 130). Under the artistic direction of Kyle Brenders, the Orchestra subsequently developed repertoire by its members during monthly workshops at the Leftover Daylight Series, Toronto. Year of the Boar is the Orchestra’s first studio recording.

Spurred by the world-wide conduction projects of Butch Morris and their results, improvising ensembles in Europe and North America have been organized to advance the concept of playing free music on a larger scale.

Although there are notable orchestras in expected places such as London, New York and Berlin, often the most remarkable, and certainly the most original, large group interpretations come from bands in smaller centres. Working with a group of like-minded musicians in his hometown, for instance, British pianist/electronics manipulator Pat Thomas has composed dissimilar pieces for the Oxford Improvisers Orchestra (OIO) on this CD. Involving voices, non-Western instruments, a tribute to a Jazz master and a literal violin concerto, each moves in a different fashion. Toronto’s AIM Toronto Orchestra (AIMTO) on the other hand plays pieces by four different composers on its seven-track CD. However under the direction of artistic director/soprano saxophonist Kyle Brenders, who penned the two lengthiest pieces, a harmonic uniformity exists.

Odd for someone who studied with Anthony Braxton, Brenders AIM Toronto Orchestra compositions, unlike his Jazz-inflected small group work, appear to avoid Jazz influences in favor of tropes from notated music and elsewhere. For example, a piece such as Thru and Through, shoehorns wordless vocalizing from Christine Duncan, Scruggs-style banjo-picking from Rob Clutton into an exposition initially stated by quivering strings, harmonized woodwinds and stacked brass extrusions. Meanwhile tenor saxophonist Christopher Willis advances the theme as three percussions clank and clip alongside. With brief sequences parceled out among many orchestra members, it’s Simeon Abbott’s piano passages which mark important transitions, making room at different intervals for Steve Ward’s trombone guffaws, Rob Pilonen’s flute harmonies and Nicole Rampersaud’s trumpeting grace notes. As the often polyphonic work advances, it’s the restated solo variants which reference the initial narrative rather than showier tutti passages that impress.

Similarly Follow Line Flow Line Follow is built up from concentric orchestral timbres that foreshadow the contrapuntal divisions among the vocalist’s nonsense syllables plus swelling and vibrating slurs and pumps from the horns. Single variations involve bass clarinet lines, cymbal cracks, bell ringing and tough guitar scrubs, with a later combination finally modulating into a languid climax that trades previously inchoate hocketing and expanding runs for popped vibrations and near silences.

Meanwhile the opening Year of the Boar brings a Jazz sensibility to the proceedings. Yet ironically or not, its composer, guitarist Justin Haynes, isn’t featured on the disc. Operating off a steady vamp with heavy syncopation from dual drummers Nick Fraser and Joe Sorbara, the tune encompasses a swing section, and a lyrical alto solo from Evan Shaw. (…)

Both the OIO and AIMTO attempt particular sound variations to re-define — or perhaps it’s to define — the parameters of large improvising ensembles. Although not everything tried is successful, the spirit of experimentation expressed by both will go far to make similar-sized groups viable as the shape of 21st Century music unfolds.

Both the OIO and AIMTO attempt particular sound variations to re-define — or perhaps it’s to define — the parameters of large improvising ensembles. 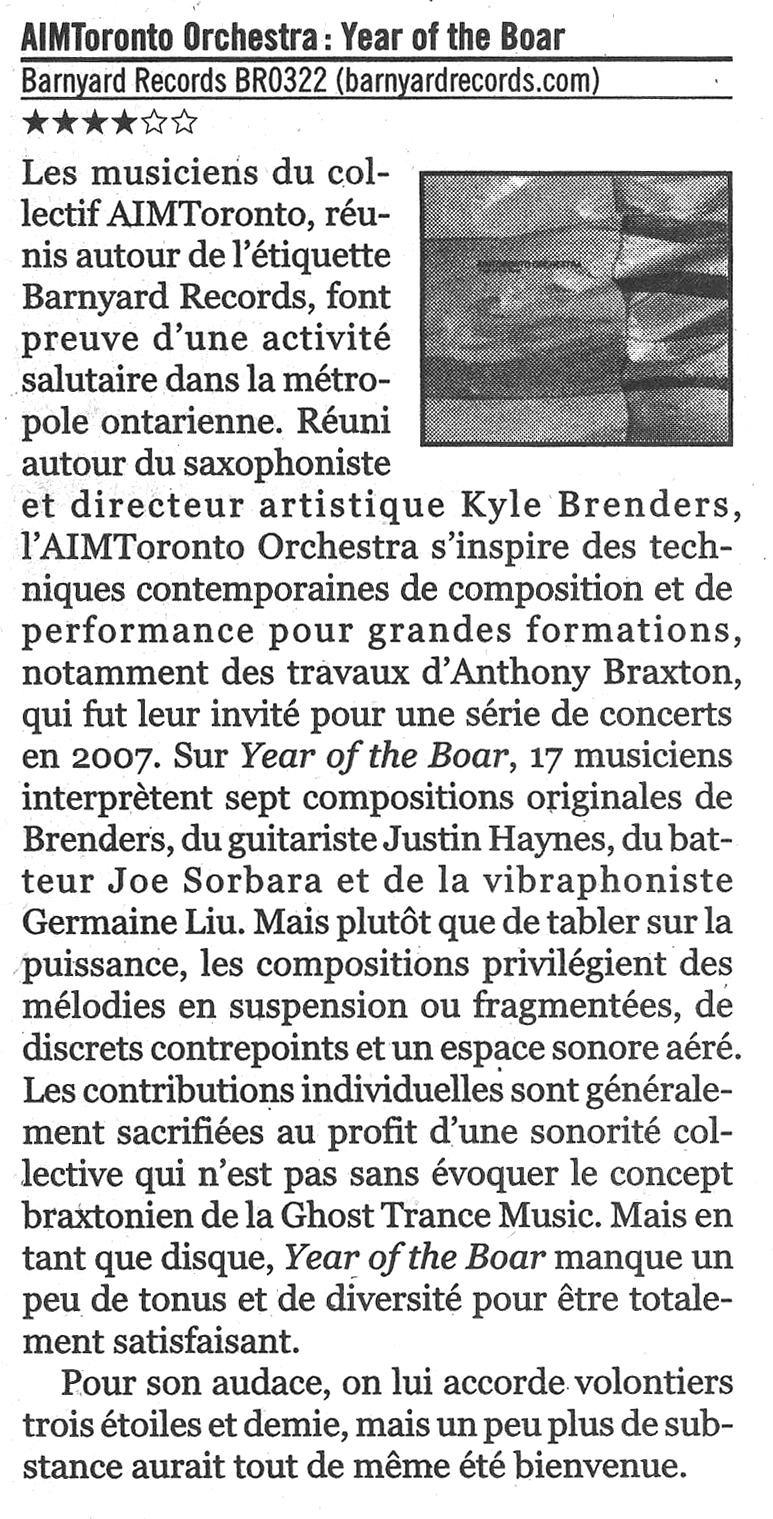